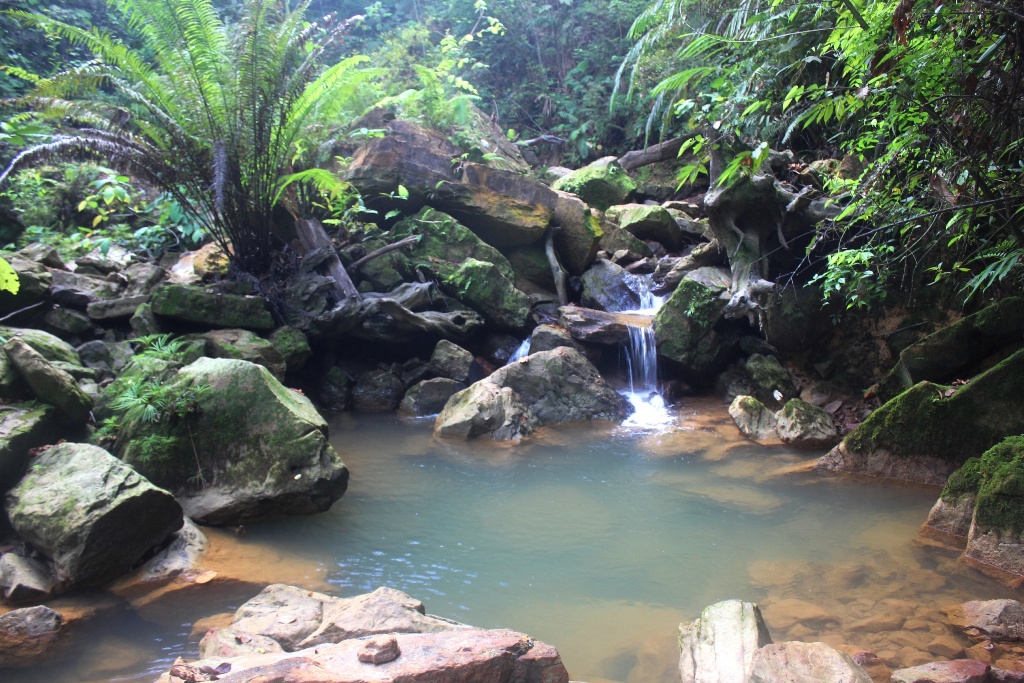 Located deep inside the Labi jungle in Belait District, our latest adventure takes us to visit three different waterfalls, each located in the upper stretches of the Mendaram River; our final research point was at the third waterfall, the location of which can be seen on the map below. 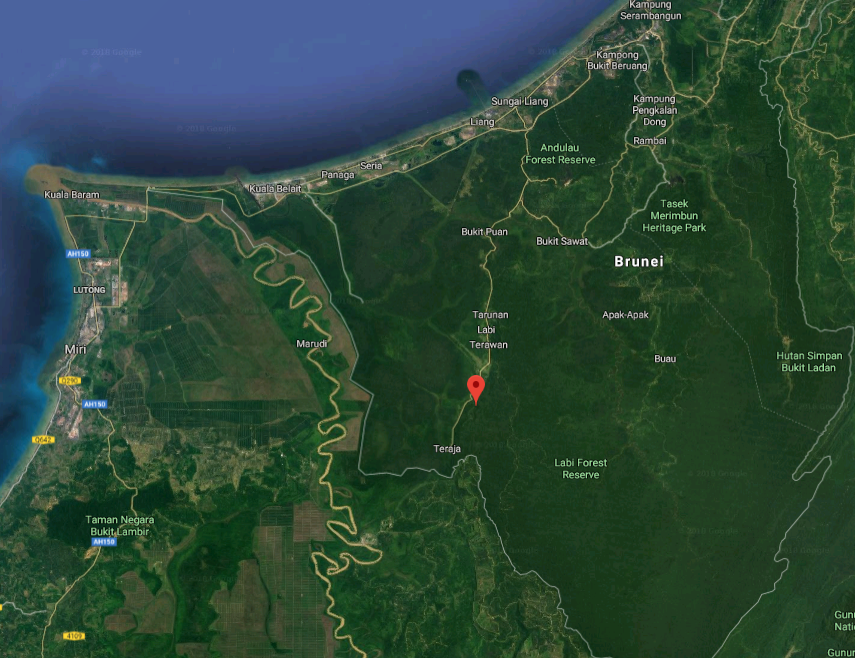 On 24th March 2018 we commenced our journey at around 08:30, the sun was already shining but I assume that it rained the night before as parts of the road were wet and gradually drying. Before we hiked uphill, approximately 100 metres from the parking spot, we managed to come across a pool beneath boulders, we decided that on our way back later on the journey that we were going to lay some traps here to catch & release some specimens. During my previous trips here, I have collected Macrobrachium sp., Hemiramphodon pogonognathus & Osteochilus spilurus in these pools, there are no submerged aquatic plants, but there are emersed rheophyte ferns such as Plagiogyria sp, which can only be found at the lower parts of our journey and Dipteris lobbiana, which are more numerous in the upper reaches of the stream.

In the lower stretches of this shallow creek there was a healthy abundance of Plagiogyra sp., a rheophytic fern. 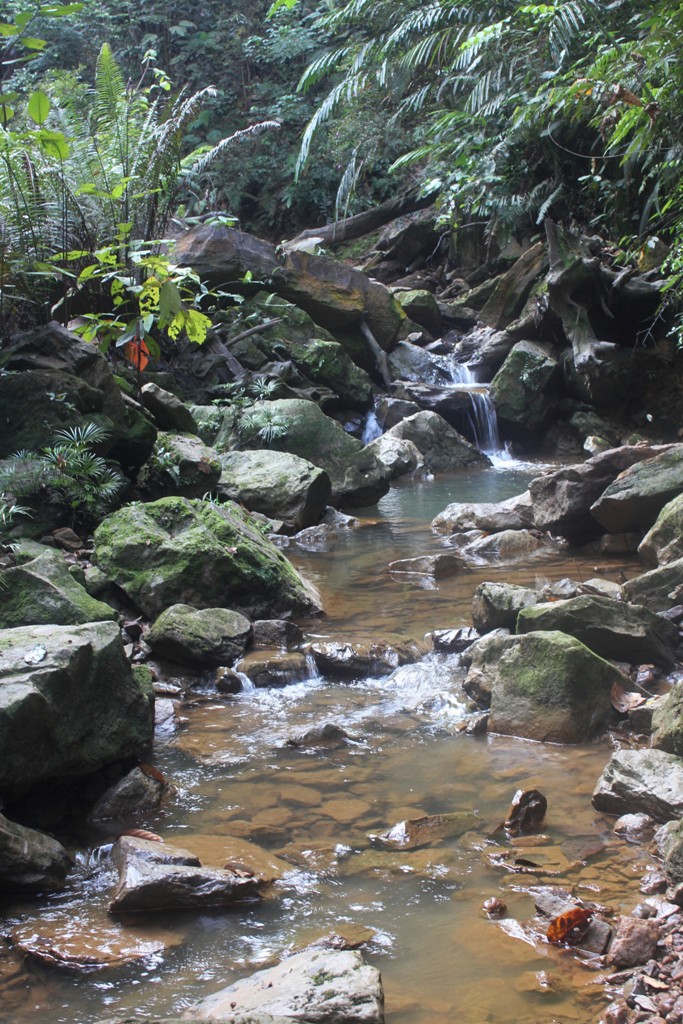 The start of this journey is the most tiring as we had to ascend uphill at an angle most likely around 50° – 60° for about 500 meters from the area where we parked, to the first and most well-known waterfall named Wong Kadir/Wasai Kadir. There are resting huts here which were installed by the local government to promote eco-tourist activities. 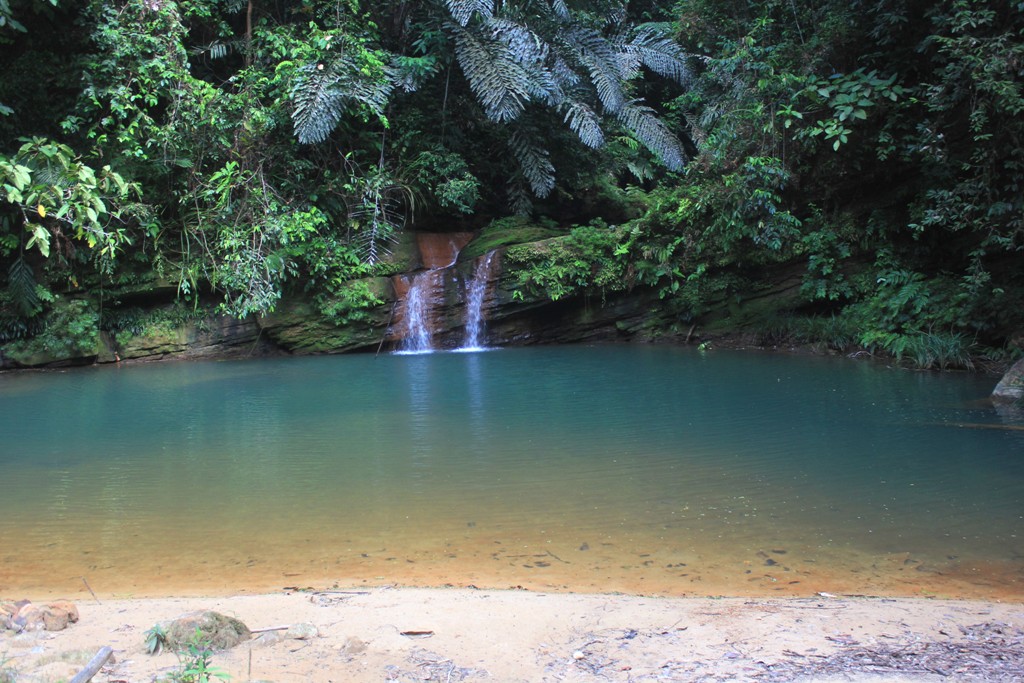 From Wong Kadir, in order to hike further upstream, we had to find a hidden path. We found it alright, but in order to climb it we had to use all four limbs as the hill was extremely steep, I’m guessing approximately a 70° – 75° gradient. Once we had climbed about 10 meters up, from there on we went downhill towards the stream and continued to follow it upstream by either walking alongside or in the water; the second waterfall was about another 300 more meters ahead. 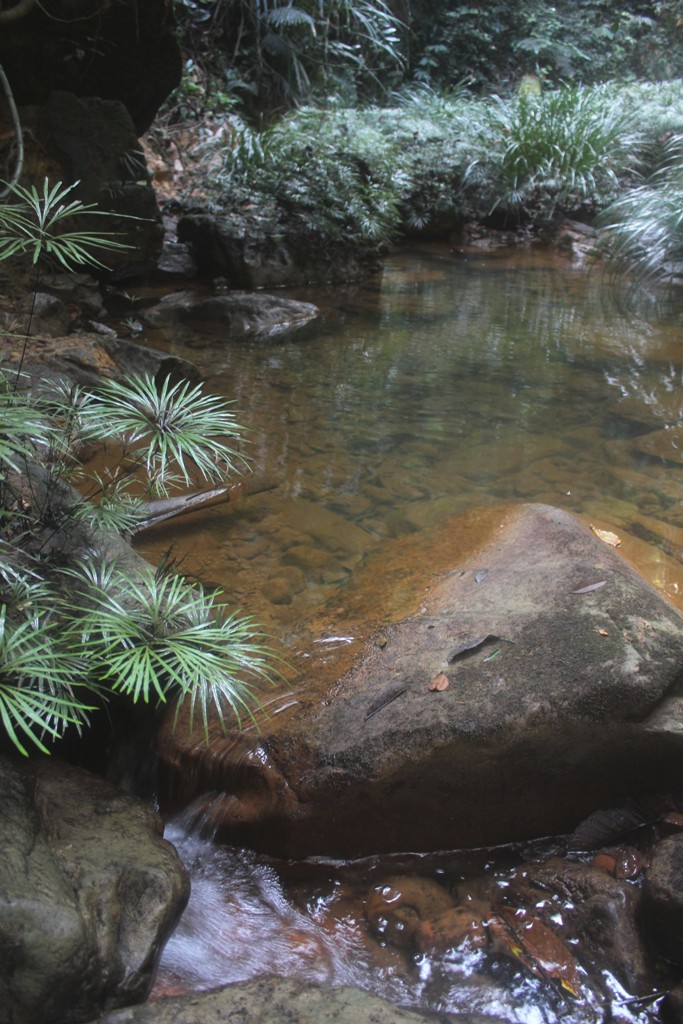 As we ascended the stream the abundance of Dipteris lobbiana increased noticeably and gave a wonderful aesthetic effect.

As there was no paths around the area where the 2nd waterfall was, we had to fall back about 10 – 20 meters to find another hidden path which may lead us upstream. As only a few people has been to the 2nd waterfall & even more few to go upstream of the 2nd waterfall, the path from here onwards were full of trees, thus we had to be careful not to get lost, & so we used the stream as a reference to not go further deep into the jungle away from the stream.

The distance from the 2nd waterfall to our collecting spot was around 450 meters, we laid our minnow traps there while resting our feet, as we have been walking for almost 2 ½ hours – 3 hours non-stop. While waiting to pick up the traps after 20 – 30 minute & then moving them to a different spot within the same area, I took testing samples of the water & snorkeled underwater to get a better view. I noted that the water parameters were:

From a geological perspective, the ground mainly comprised sandstone from the surrounding cliffs with stones/rocks ranging from as small as 5mm and up to more than 30cm, soft substrate found mostly consisted of sand and there  was also a lot of driftwood. There are no submersed aquatic plants at the collection site, only dense clumpings of Dipteris lobbiana, as well as algae/moss (only grows emersed directly above water level) & small clumps of Aridarum caulescens. a beautiful rheophyte with attractive flowers; the entire genus of which is endemic to Borneo. 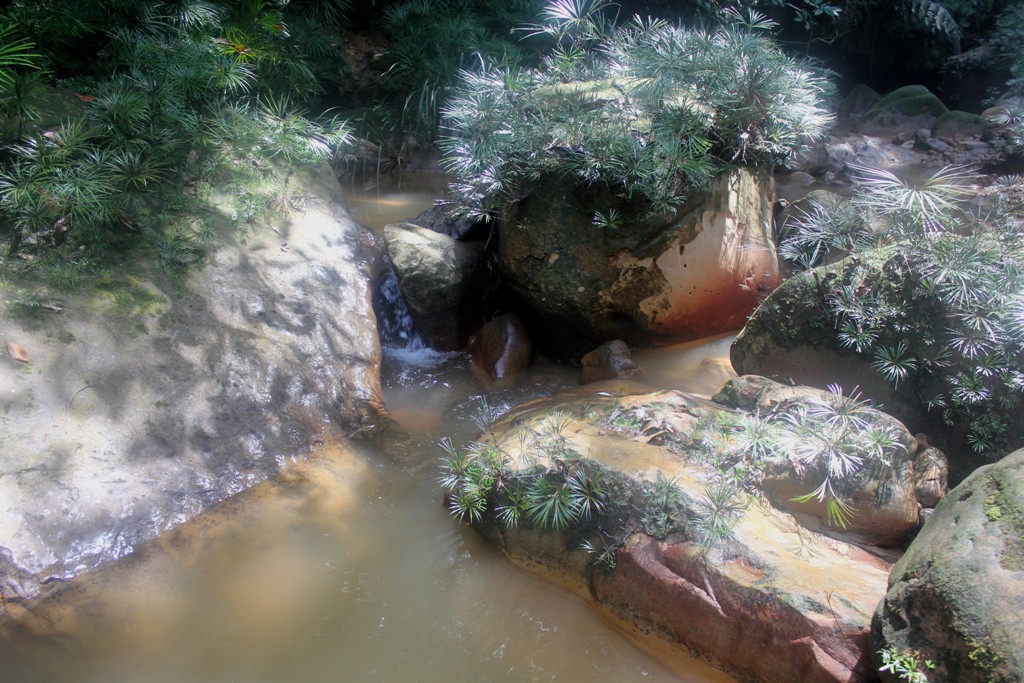 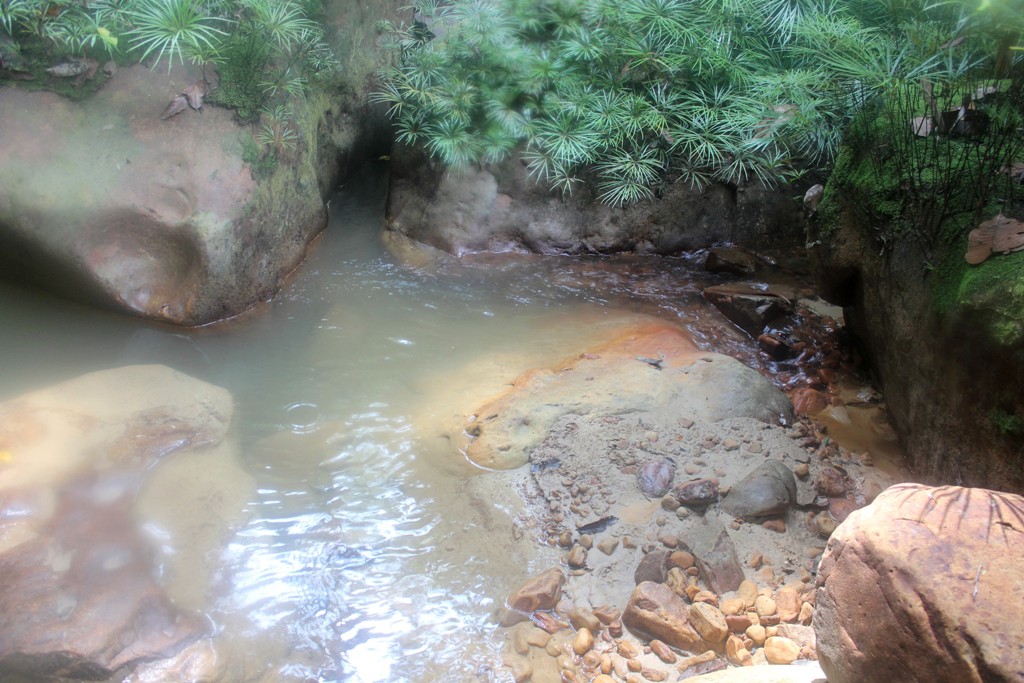 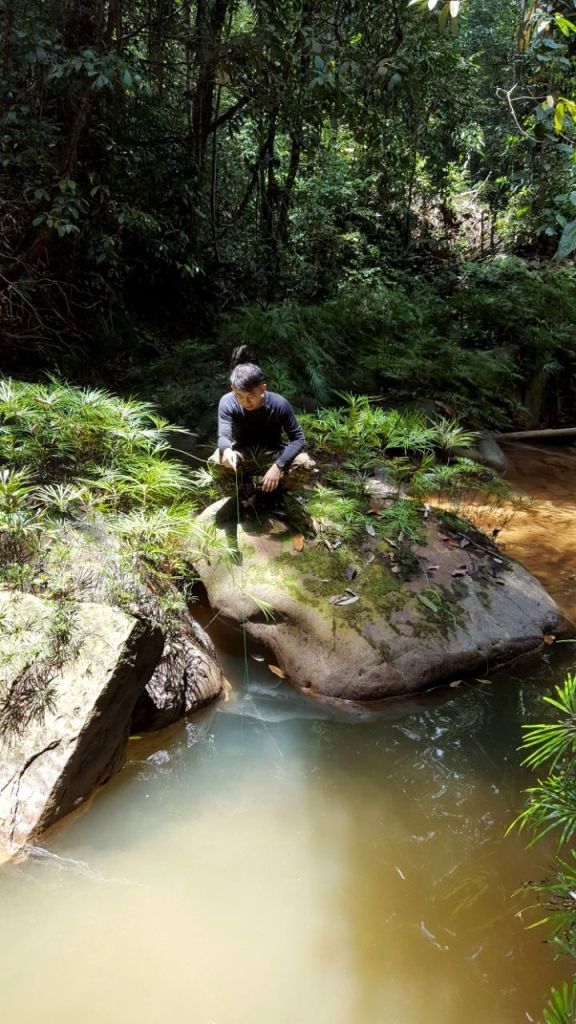 We spent about 1 ½ hour at the collecting site and managed to collect the following species: 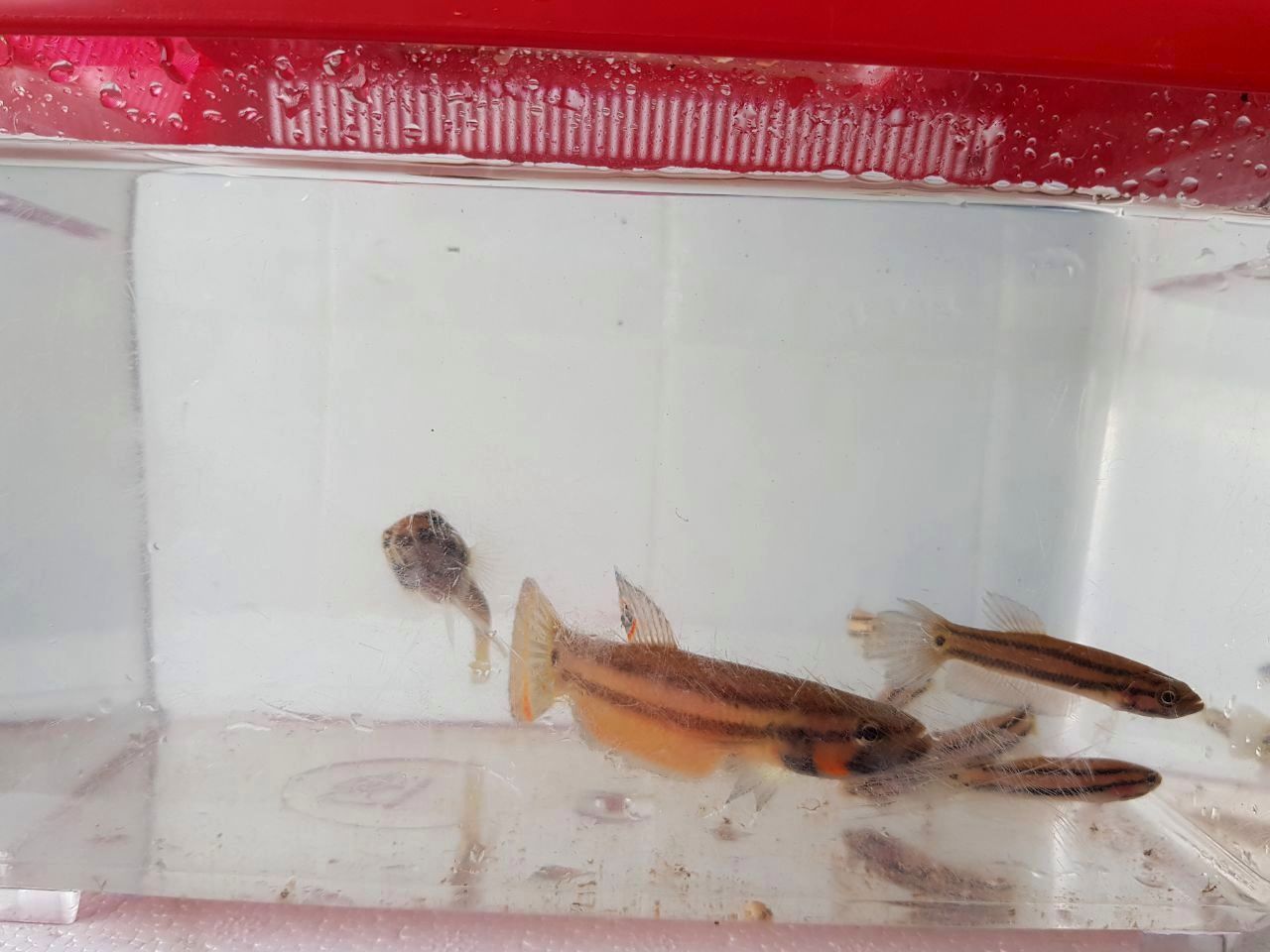 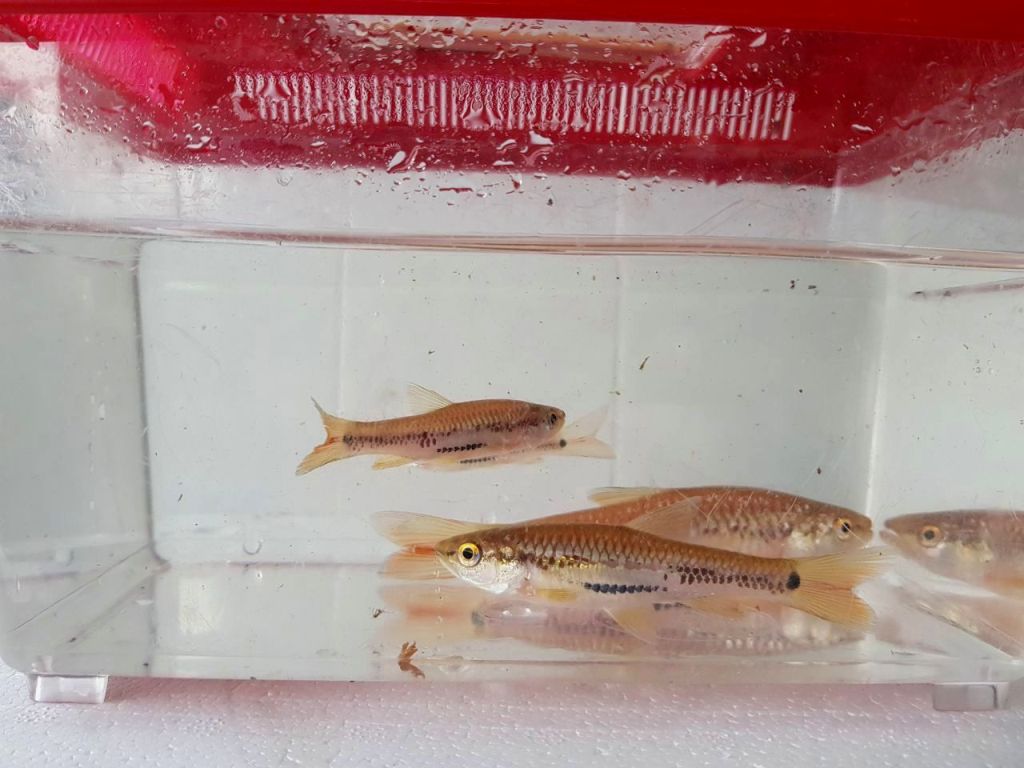 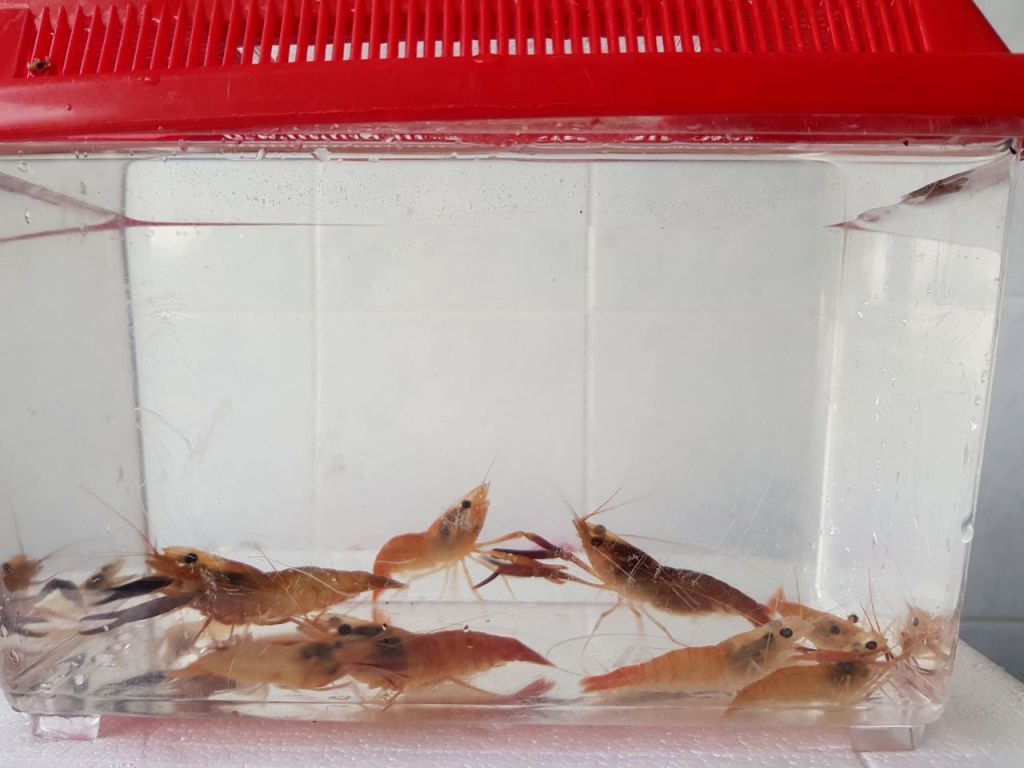 Based on my own experience, I realise that the catch of the day will always be very low if it rained the night before, thus on the day of our trip, we managed to only catch a few; this is most likely due to the combination of the mass influx of river flow due to the rain as well as the subsequent increase in turbidity.

From the collecting site, some members of my team & I decided to hike further upstream whereby the paths were blocked by boulders, estimated 50 meters – 100 meters ahead, we unexpectedly found the 3rd Waterfall. We went back to the collecting site, & took only our essentials, hoping to come back later once the water at the collecting site has cleared up & after we took a dip at the waterfall ahead which was only up to approximately 150cm deep. 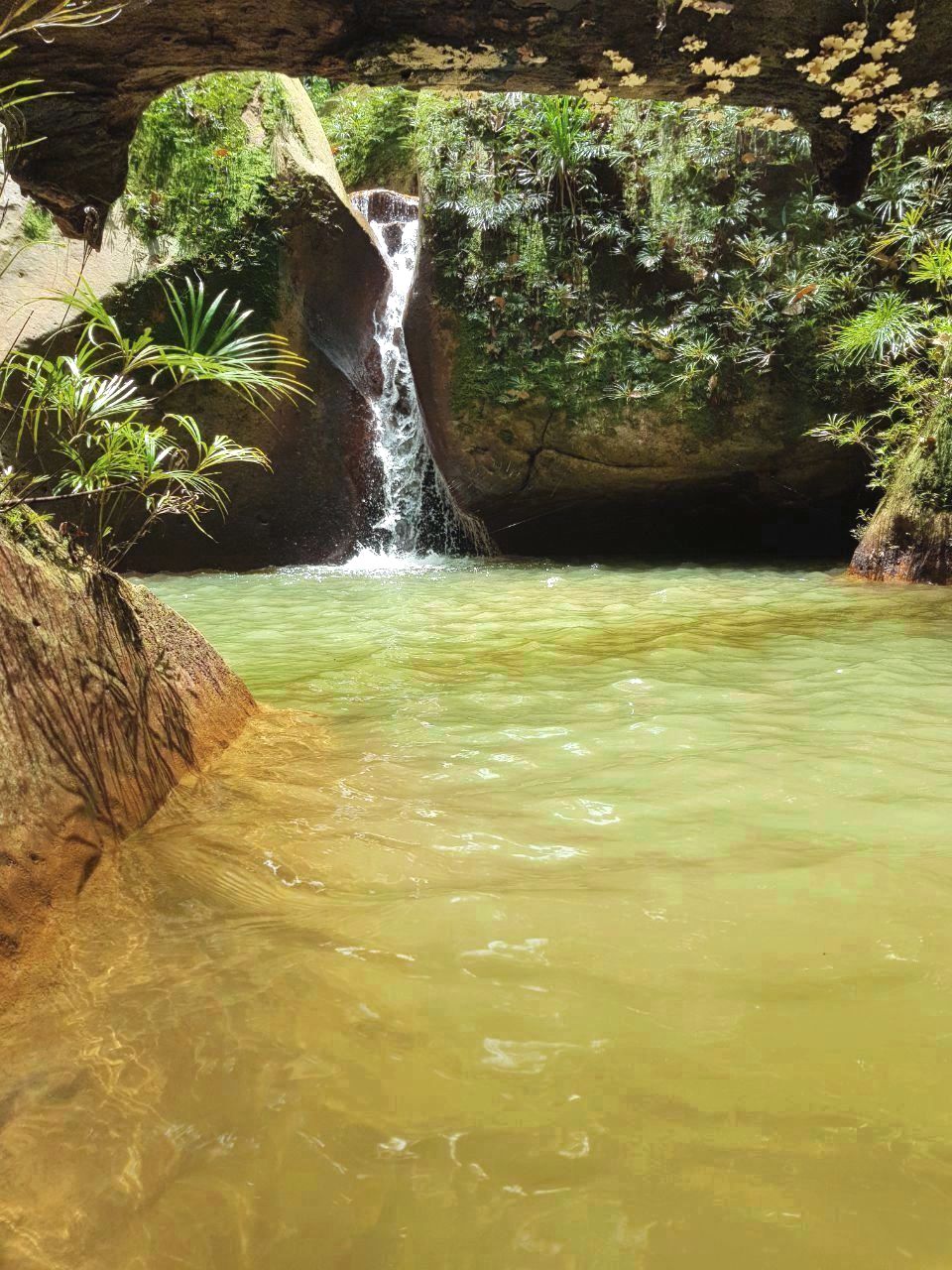 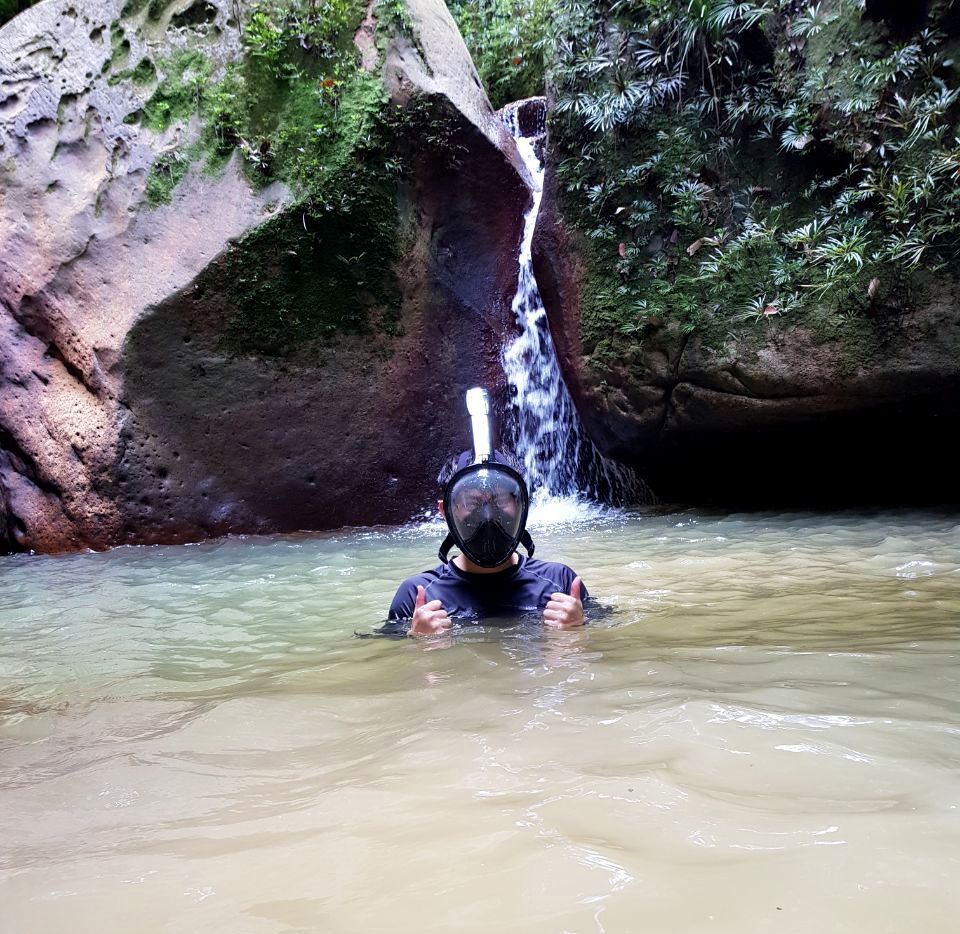 After around 30 minutes or so, I realized the water wasn’t clearing up, it usually only takes a few minutes for the water to clear once disturbed, especially at the waterfall area. I then realised that it might be raining further upstream and so for safety reasons I told my team to pack up in 10 more minutes and we went down to our collecting site, packed everything up & went straight ahead to the parking area.

Around 10 – 15 minutes walking back on the rocky river, it rained a little bit, but stopped only after a few minutes. Another few minutes after that, the clouds started to become darker and the rain suddenly poured down hard! What was once a dry bank of a shallow stream was now was full of rainwater due to the surface runoff. We decided to pick up our pace moving faster to find some shade from the rain and only briefly stopped to rest & ensure our equipment was fully protected. From here onward, we went down to the parking area without stopping and as we got nearer to the parking area, the rain got less & less; a few minutes after we reached the parking area the rain finally stopped and this also signifies the end of this journey.