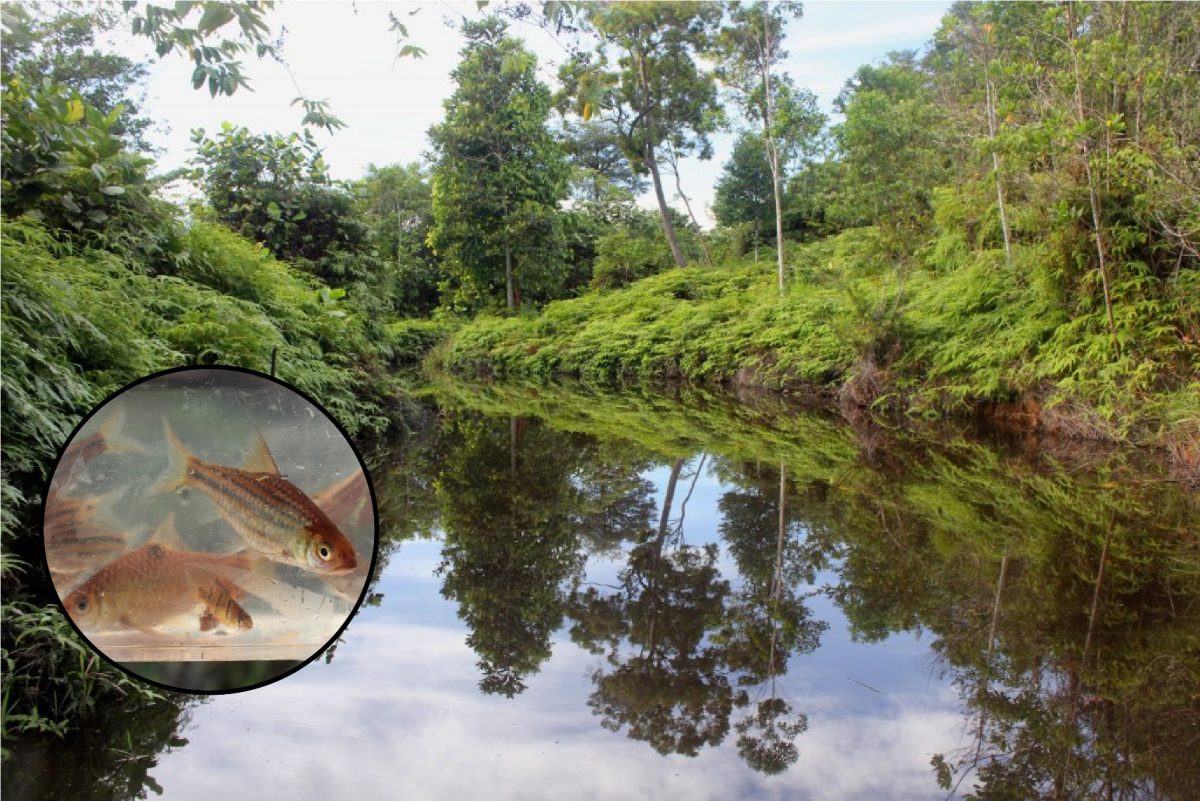 We have embarked on our next adventure, which this time around takes us all the way to the upper stretches of the Lumut River. The Sungai (River) Lumut is located in Belait District, the largest district in Brunei Darussalam and has a length of approximately 14km+ which starts at Lumut beach seems to end somewhere in the region of its arrival to the Labi road; it is an independent river and not connected to the Belait river. 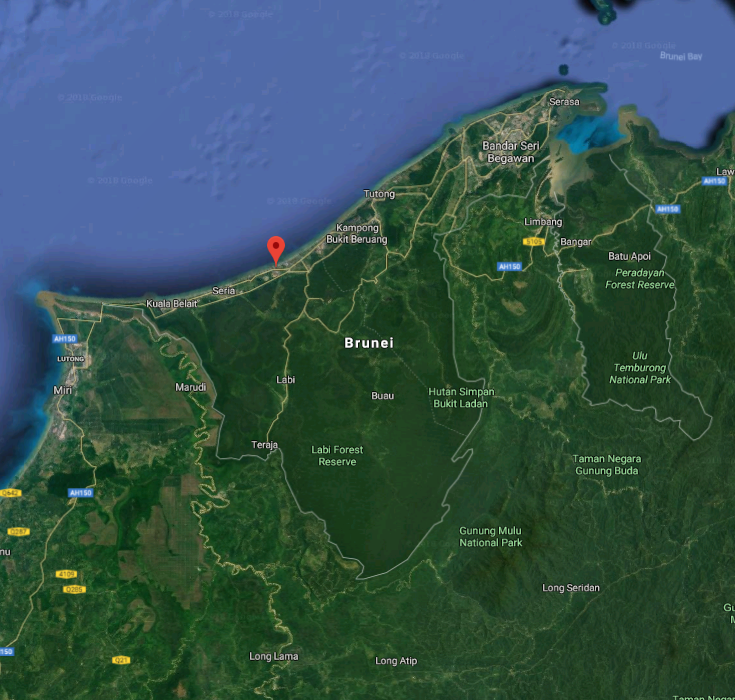 Our collection site is located next to the Telisai Lumut Highway in similar habitat to our previous trip to the  Upper Telamba river. However, unlike the upstream of Telamba river, which was a clear water habitat, the first thing that caught my eyes when I arrived on site was how dark the water was. 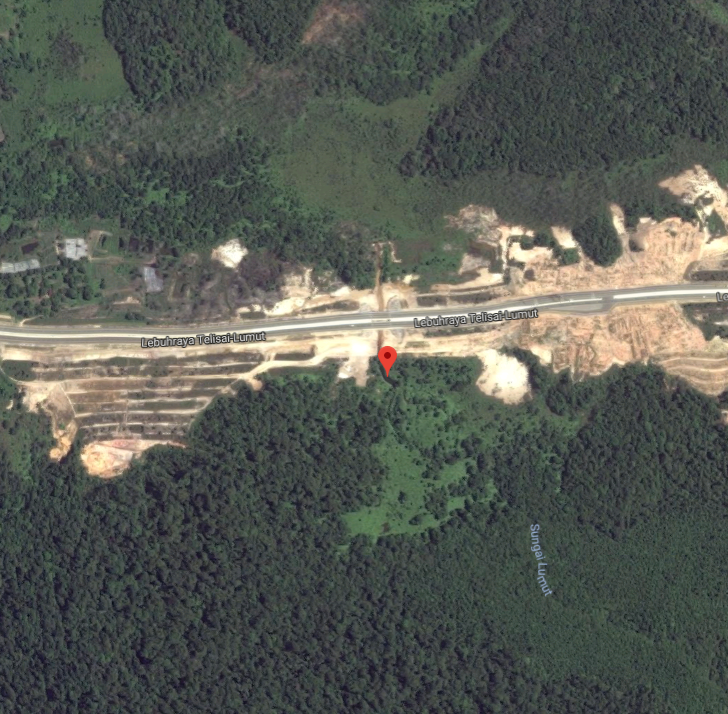 The water was very tannin-stained, a peat river, but as it rained the previous night I did not anticipate catching much on the day of the trip.

We started off after parking on the side of the road and began walking along the sandy substrate, we searched for a path to make in order to reach the upper part of the river upstream which was much deeper in the woods, but unfortunately, there were no paths that could be made; one of the main obstacles was the tall grass which was blocking our way, these particular grasses have very sharp edges which happily slice their way through human skin – imagine paper-cuts multiplied by a few thousand! 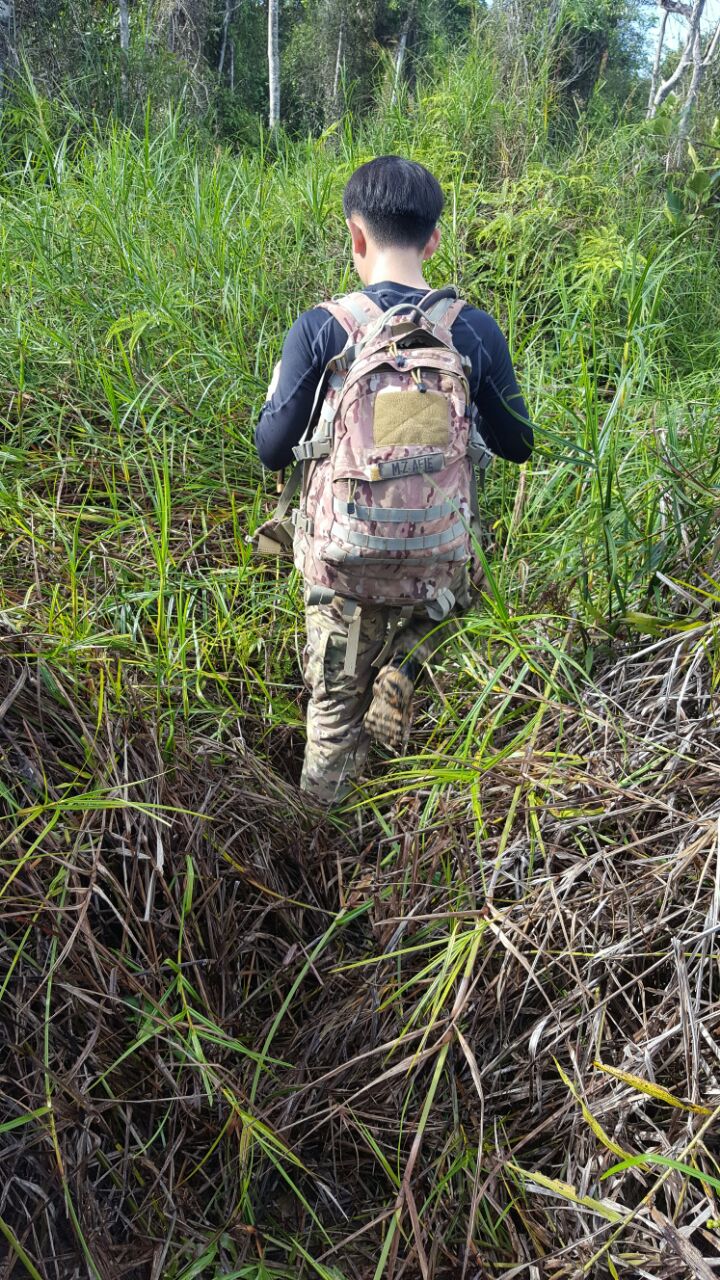 We decided to turn back to find another route and on our way, we stumbled upon the wonderful and relatively common lowland pitcher plant Nepenthes gracilis growing abundantly. As we reached nearer to the river, we found another path which appeared to have been made by some type of animal(s), possibly wild pigs; the path lead toward the river, but not that far in.

Compared to the previous path, the area nearer to the river has very dense vegetation mainly made up of what looks to be one species of Fern; still quite difficult to manoeuvre ahead but we eventually reached the river . However, we quickly realised that from this new position we could not go into the river as the water was just too deep, probably 1.5 metres at first and from then onward we couldn’t be sure of the depth. Nevertheless, I systematically opened up my minnow trap, put the bait in, extended the rope, threw the trap in the water and tied the rope to the ferns; as expected, as soon as it entered the river, we couldn’t see it due to the intense colour of the water. 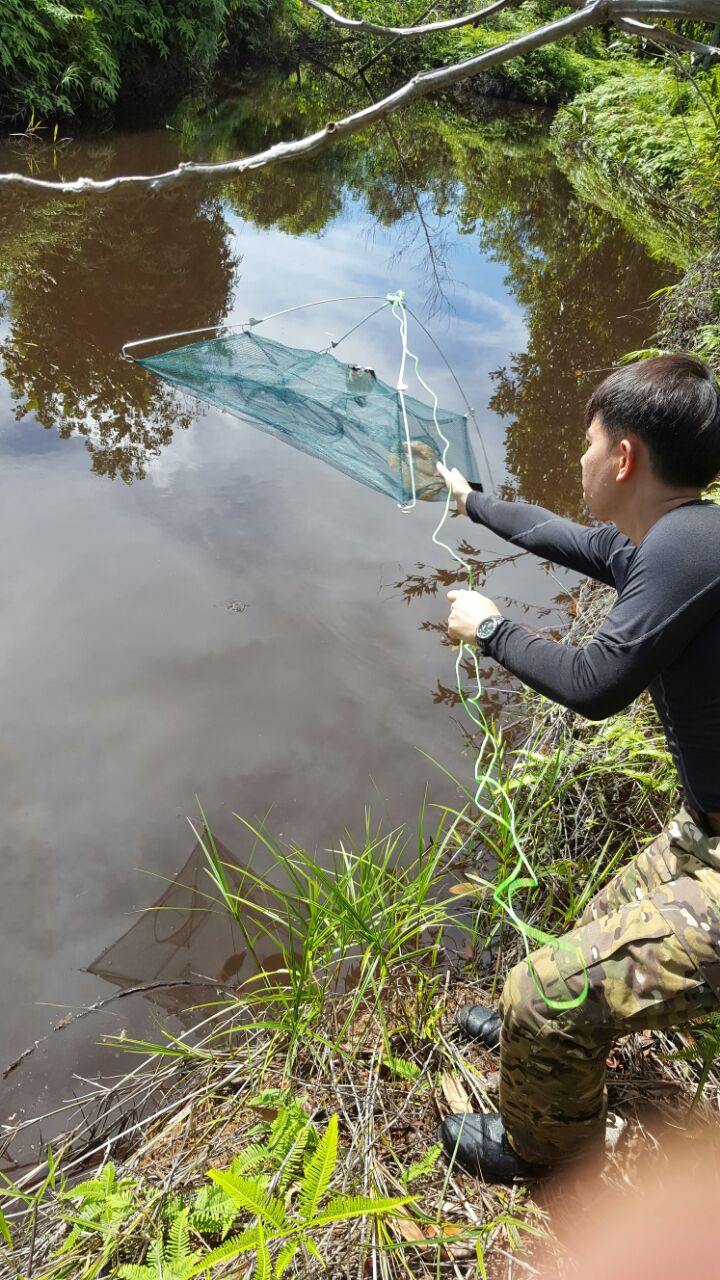 From the first accessible path beside the river was able to see an interesting cove where I would be able to stand beside the river and get a better look at the habitat so I headed in that direction. My first thought once I arrived was “This Place Is Perfect!”, especially since the area had some really nice Eleocharis growth, some large driftwood on one side and some small dead branches mixed with a lot of dead leaves. The vast majority of the riparian vegetation comprised ferns which provided shaded areas for the fishes so I threw my second minnow trap into the water and tied it to some grass in the same way as before. As soon as the trap entered the water it vanished due to the extremely low visibility, so I presumed that this area is probably less than one metre deep.

Half way to the river, close to the river bank there lies a resting place made by a wild boar which is around two metres in diameter. We were able to set up two more traps here, one in a slightly more open water area and another under the shade of tree with a lot of twigs & branches underwater.

After throwing the last trap into the water, we waited for about 15 minutes only to pick & log from the last trap thrown to the the 1st trap on the other side. The 4th & last trap located beneath the tree where there were a lot of twigs & branches, we managed to catch: 1. 3 x Adult Desmopuntius johorensis (below).

At the open area, we unfortunately did not manage to catch anything so we moved back to the other side of the river to where we first laid trap 1 – here we found the following species:

The last trap we picked up during this trip was at the area , where the land was caved in from the main river, forming similar to what a bay looks like; inside the last trap, we caught a lot of fish. 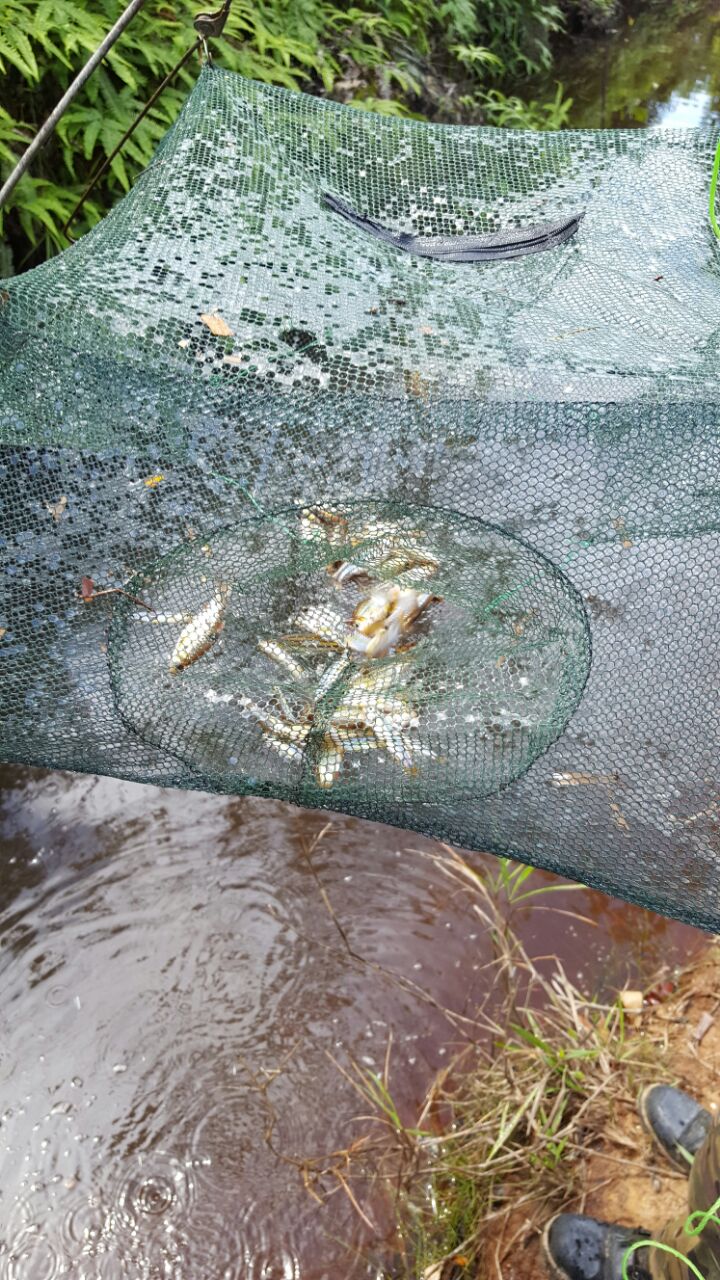 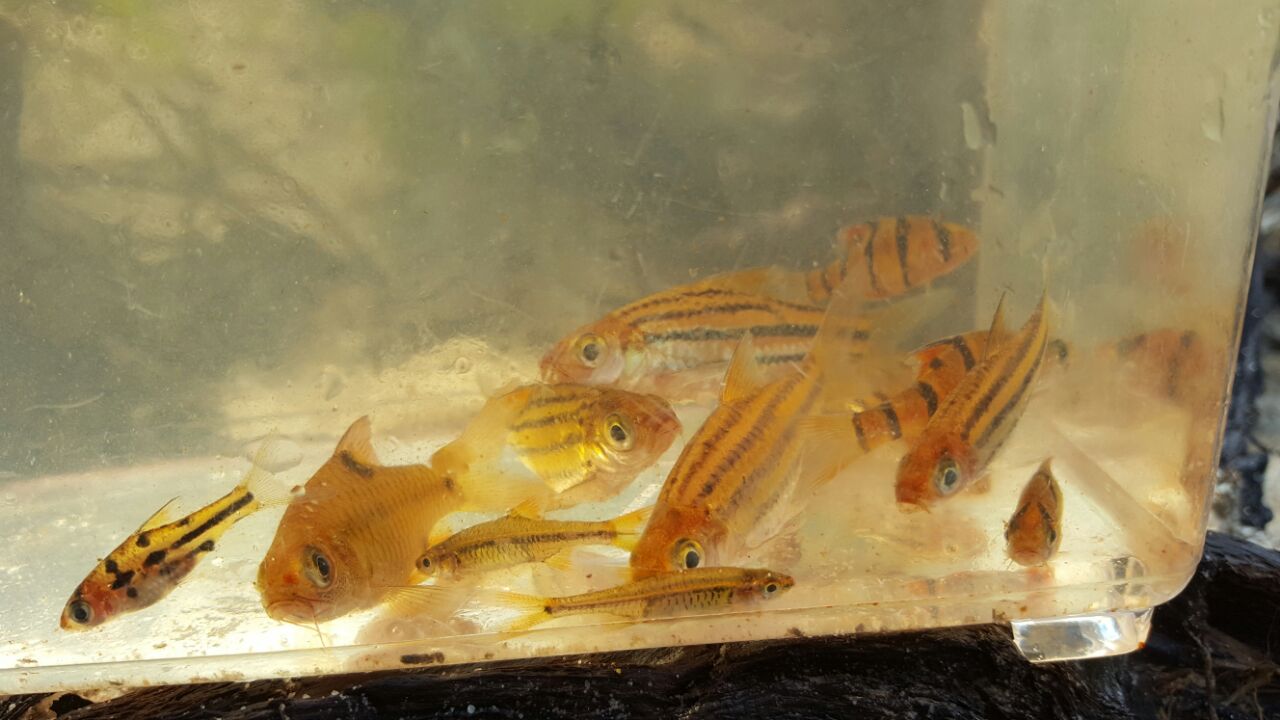 All of the traps set on the day were laid within a five metre radius from the centre of the river. At various locations, I noted the following habitat characteristics:

• The river was around 8 metre wide.
• The river depth appeared to occur in three types, extreme shallow (~10cm), medium depth in riparian zones of between 50-100cm and then ~200cm+ towards the centre.
• Water was tannin-stained to the point where the visibility underwater was only a few centimetres.
• pH was between 3.7 – pH 4
• Substrate was mostly clay soil, silt and leaf litter
• Temperature was on average 29°C – 31°C
• TDS was approximately 017 ppm – 019 ppm
• The only aquatic plant observed was an Eleocharis sp.
• A lot of driftwood was present in the area.