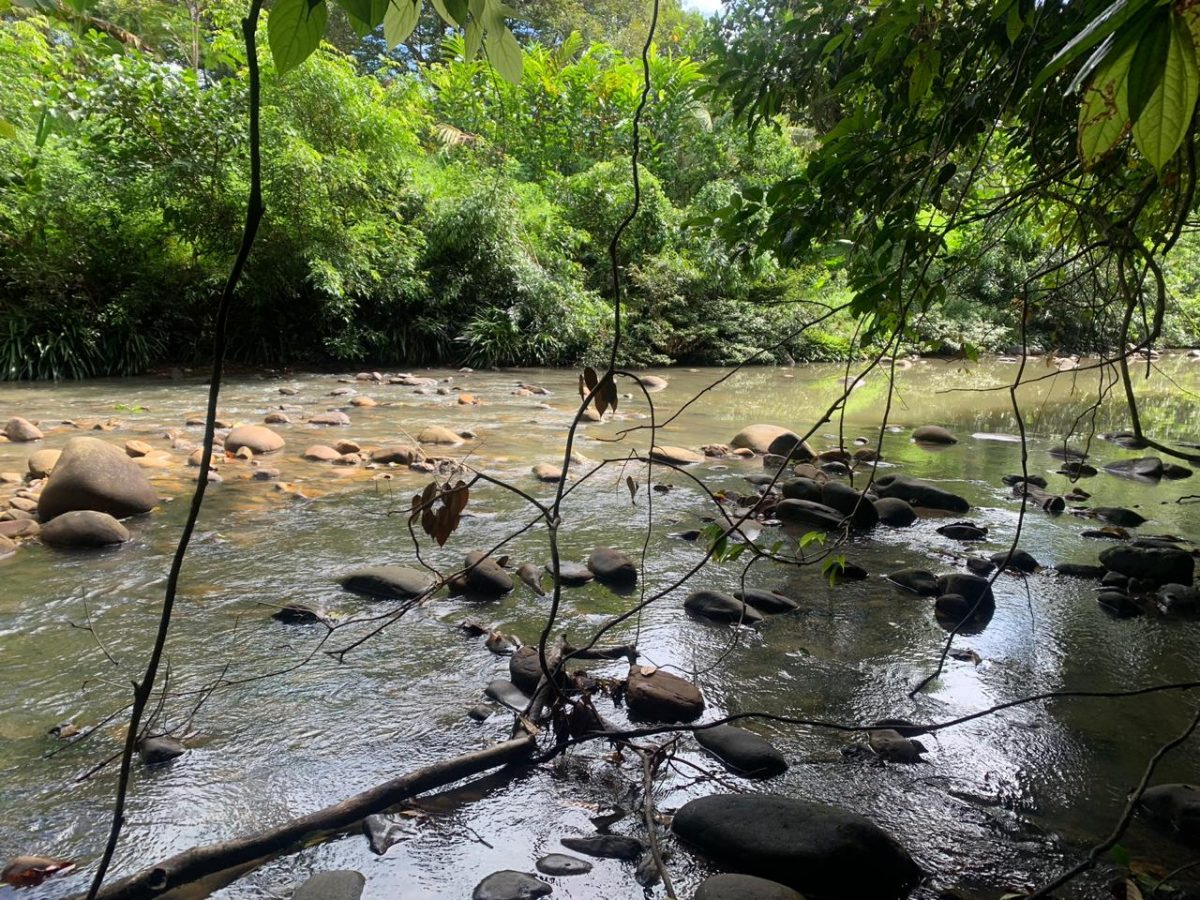 Due to work and college commitments , I had almost no free time to do anything other than rest. With the COVID-19 situation happening globally, Brunei was also affected, borders were closed and we couldn’t travel internationally, thus I decided back to go to the jungle to release some stress. The border closures resulted in the Bruneian government opening up the Temburong bridge (now formally named as Sultan Haji Omar Ali Saifuddien Bridge). Temburong Bridge links the 3 mainland districts of Brunei with the Temburong exclave and is the longest bridge in Southeast Asia, 30-kilometre (19-mile) long.

As there is a new bridge to Temburong, it is now much easier to go there without passing through the border checkpoints of Sarawak, Malaysia, and this gave us the opportunity to explore in the Temburong river systems.

For our 1st destination within Temburong district, we decided to go to the village of Selapon (4°40’55.61″N, 115°12’30.50″E) which is where the Sungai Lamaling Besar flows through. From there it heads deeper into the jungle to the East, where it splits, one going to the Eastern side of Temburong border with Sarawak, another splitting to the South possibly ending at the Northern part of Peradayan Forest Reserve; this area is used by locals as a picnic area. In the past there were not as many people visiting this area, but now there are more and more people visiting daily, many focus on local tourism.

Before setting off to Selapon, we decided to meet at 8.30am in Kampung Mentiri (Mentiri Village) which is very near to the Sultan Haji Omar Ali Saifuddien Bridge. From here, it took us about only 30 minutes to reach our destination. When we arrived, there were already a lot of people at the picnic area and we drove further up, but due to rain the previous night, the road was very muddy and the car became stuck in the mud for a couple of minutes. Luckily we managed to free the car and afterwards, we decided to just turn back and head closer towards the picnic area, and at around 50m – 100m downstream from the picnic area, we chose that place as our research area.

It was our 1st time surveying in that kind of river type, which is a shallow, clear, medium flowing river, so our method of catching for that day was only using hand nets. We were not perfectly prepared with respect to methodology as we did not know what to expect or what methods we might have adopted to catch the fishes.

When we arrived at the river, the 1st things we recorded were:

As we put our equipment down on the other side of the river, we slowly scanned the water from above to see if there were any fish and at first glance, it seemed as though there were no fish at all, the current ripples made it difficult to see, but the longer we stood, we began to see some movement. In the more shallow areas, we couldn’t see any fish, so we tried lifting the rocks one by one, and I eventually came across a single Malaya Shrimp (Caridina sp.) hiding among the rocks. The colour was dark blue, with a distinctive single stripe from its head to tail, but when we captured it and put it into our bucket, the colour changed immediately to more brown colour.

While I was searching one area, one of my colleagues managed to capture a Gastromyzon Sp. , with an orange colouration on its body. it was found in the shallows of the river where the depth was about 10cm and the water flowed somewhat more slowly, quite similar to the Malaya Shrimps. After some research, we determined that it was most likely Gastromyzon borneensis. Initially it was very still and very well camouflaged, with the orange colouration of the rocks matching it’s colour perfectly; it was invisible until it moved slightly.

As time passed, among the shallow waters, we also managed to find one Macrobrachium sp. and a few Eugnathogobius siamensis

We moved on to the deeper part of the river, there we saw a school of fast-swimming fish that could easily be seen from above, and we managed to catch a few of the juveniles. It turned out to be Paracrossochilus vittatus. Along with that, we also managed to catch an unusual fish that we did not think would exist in the area, a species of Flying Barb, Esomus sp., distinctive by its whiskers and body shape; it is most likely to be Esomus metallicus

While I was in the deeper part of the river, possibly around 50cm deep, I asked my colleagues how they managed to catch the Gastromyzon and they explained that you need to stay still in one place without moving very much and while watching the rocks for any movement. Not long after that, I caught a glimpse of movement, a fish latching onto the rocks, but this time, it seemed different. As the fish had a stripe pattern on its body, I could tell it wasn’t one we’d seen already and so we tried to catch it, but as it had a lot of hiding spaces, it was a bit difficult to catch. We had to trap it in between two large hand nets while one person lifted the rock that the Gastromyzon was latching on to. Afterwards, we identified it as Gastromyzon cranbrooki .

We wanted to further search the area, but as we had other plans, we packed up and headed back with the aim to return.

Similar to our 1st trip, prior to departing to Selapon, we met up at Mentiri and used 1 car. From Mentiri we arrived at Selapon at 8.30am.

When we arrived, this time, the river condition was different, the water was very murky, the current was stronger and the water level was higher maybe by 20cm. most likely either the night before or before dawn of that day, there was heavy rain in that area and further upstream.

We went to the same exact location as our first trip, but this time, as it was almost impossible to see fishes under water due to the turbidity, we decided to use minnow traps and bottle traps at various locations within 20m. We let the traps settle for about 30 minutes.

As we waited, we tested the water parameters and received the following results:

After we finished waiting, all the traps had no fish in them, so we moved them to a different location not far from our starting point and waited for 30 minutes more.

We proceeded to lift some of the rocks in the shallow areas, hoping to find some Gastromyzon, unfortunately, there were none, instead, we found Freshwater Crabs walking on the rocks underwater, but as of now we’re not quite sure exactly which species of crab it was.

After almost 30 minutes, we lifted some of the traps, from the depth of 20cm, and we managed to catch a lot of Rasboras, at least one has yet to be correctly identified, but we have assumed it’s ID on what we have researched based on its body shape and colour, and most likely the nearest distribution outside of Brunei, and a Barb which unfortunately escaped before we could take a picture. As for the Rasboras, we’ve identified that the species caught were:

Other traps contained the same species. Thus, afterwards, we decided to reposition the traps again, and wait for another 30 minute. This time, we laid down bottle traps in various places including a hole where there were tree roots and a slow flow of water.

While waiting, we decided to scoop our nets at the side of the river below riparian plants at the water level on the river bank. We scooped at the leaves and its roots, and to our surprise, we managed to catch a lot of Malaya Shrimps, Brown, Black, Blue and Clear ones, and with that, we decided to scoop along the river for about 15 minutes while we waited to lift the traps

After about 15 minutes, the traps either had the same Rasbora species as the previous trap setting, or no fish at all, but in the slightly deeper depth, we managed to catch an interesting fish, a species of catfish, Hemibagrus baramensis.

We focused on scooping beneath the riparian plants and fortunately, we found another interesting species, a hillstream loach, Homalopteroides stephensoni.

We packed up at around 11.30am and went back home, and hopefully will be able to explore what lies in Selapon again in the near future.