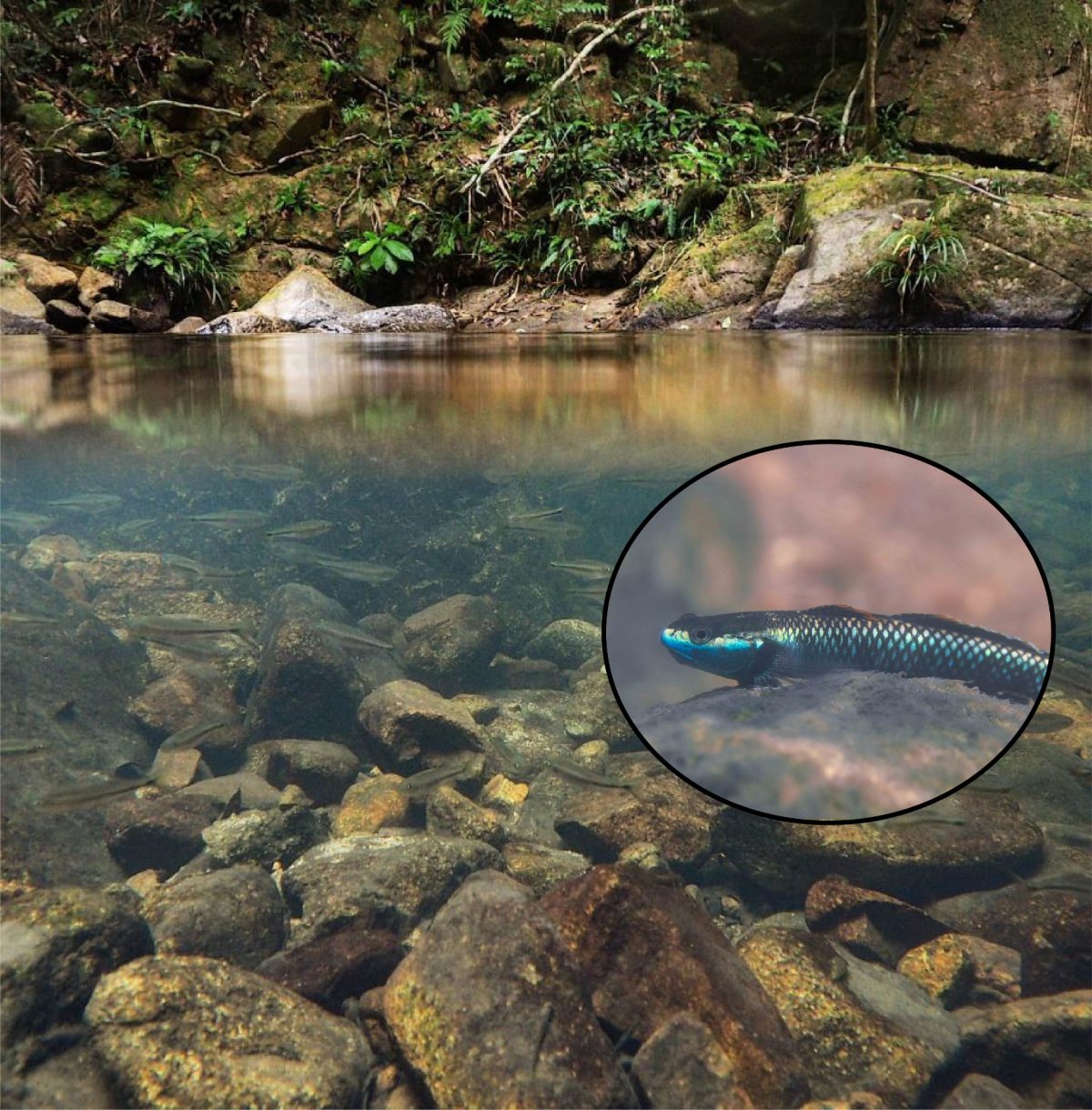 Hill stream habitats in Hong Kong are home to some of the most endearing and enigmatic fishes on Earth. These oxygen-rich, cool mountain streams or often, torrential rivers, provide crucial habitat, not only for exclusively freshwater dwelling species, but also form important migratory routes and nurseries for anadromous, amphidromous and catadromous fishes, those which migrate upriver, those with complex breeding strategies involving both fresh and saline systems and those which migrate downriver to the sea to spawn, respectively. 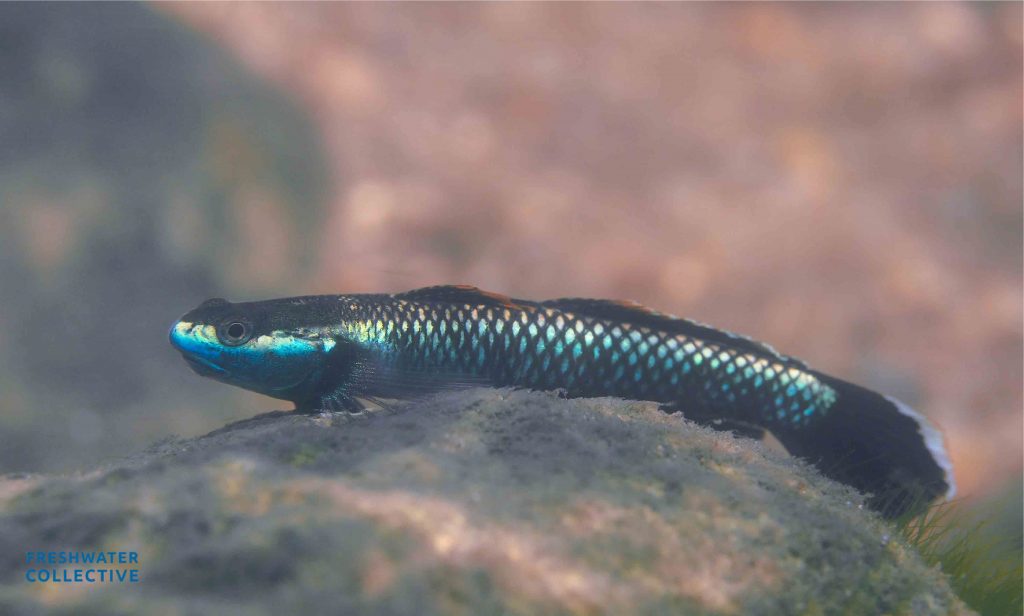 One Hong Kong hill stream species which is particularly fascinating is the goby Stiphodon atropurpureus. From their striking iridescence, their adaptation of grazing on periphyton with their regenerative teeth or their amphidromous breeding strategy, S. atropurpureus are really quite something to behold. It usually can be found in biotopes with fast flowing waters at relatively high altitude, often their biotope will tend to be characterised by slim stretches of riffles and intermittent wider stretches with slower flow; they are often located above waterfalls and/or cataracts. 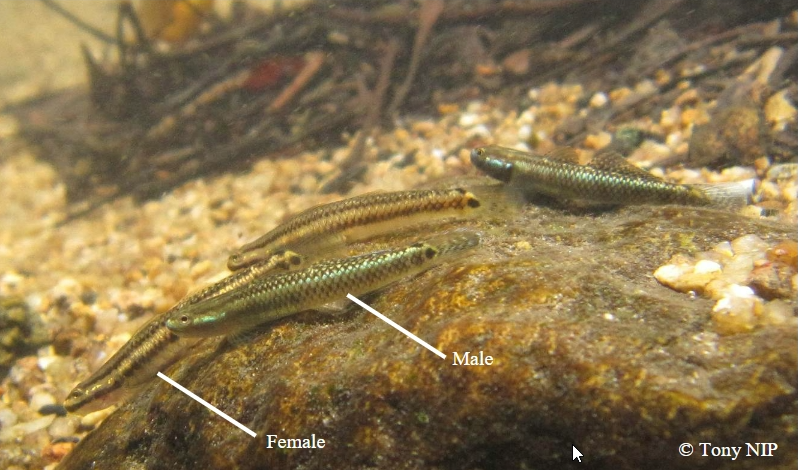 Stiphodon atropurpureus from Hong Kong in their natural biotope. To learn more about fishes of conservation concern in Hong Kong click the image. Tony Nip©

Evidence has suggested that different syntopic Stiphodon species actively select different substrate types, even to the level of specificity that distinct species can be associated with certain sizes of rocks; this seems to be particularly true for female Stiphodon. In these biotopes where different Stiphodon species co-exist, it’s hypothesized that this type of behaviour is effectively a form of resource partitioning, a method of avoiding interspecific competition.

Naturekind® is the ideal complete food for grazing species. Click the image above to learn more

Amphidromy in sicydiine gobies is practised not only by Stiphodon, but by all of the genera in the Sicydiinae sub-family. McDowall (2007) set out some possible advantages of employing such a breeding strategy. He stipulated that amphidromy may facilitate the colonisation of new islands, quite befitting of a volcanic region. He suggested that it may also allow re-colonisation of streams following volcanic eruptions or rapid changes in water flow during the wet season, and considered that leaving the marine environment can be seen as a trade-off since amphidromous gobies like Stiphodon are often the only fishes found in their habitats and therefore predators are virtually non-existent, the downfall being that food sources are far less diverse than in the ocean. 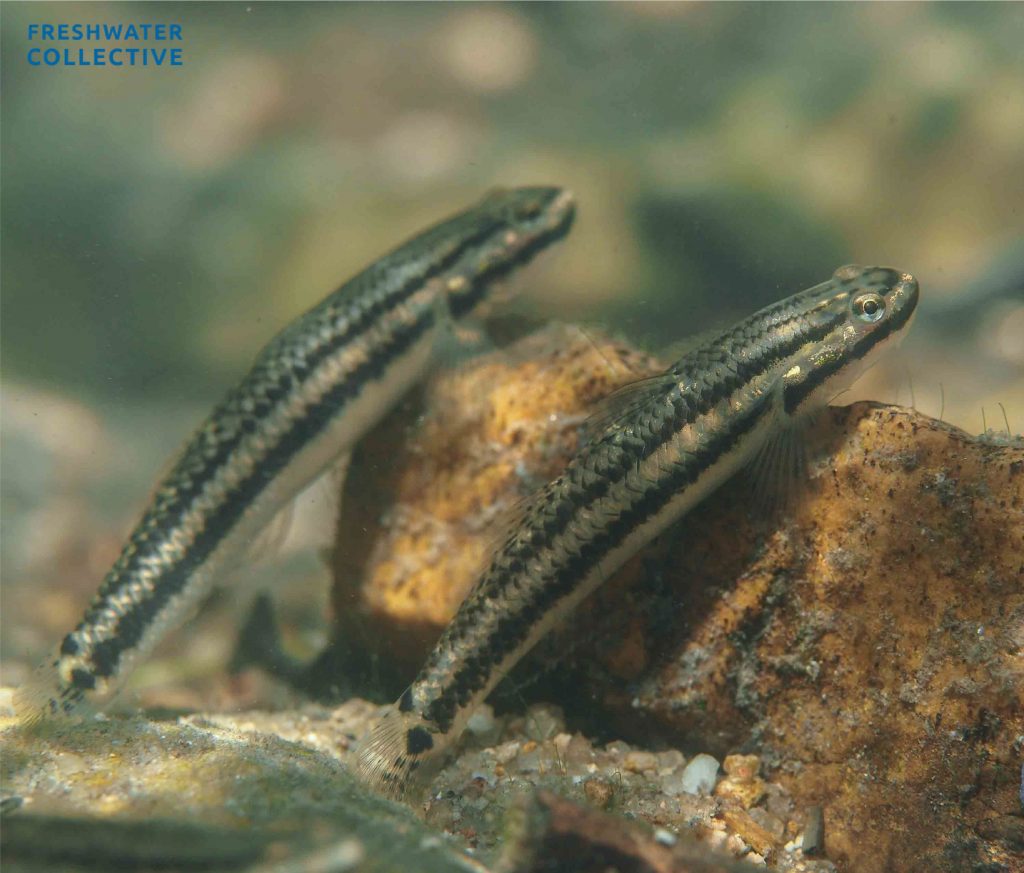 Of the 36 or so recognised species of Stiphodon, a very many of them have extremely restricted ranges, often being restricted to one island and even in some cases, one stream.  S. atropurpureus has been recorded from habitats across much of the Philippine Sea and South China Sea region and is known to occur throughout islands of southern Japan, Taiwan, parts of coastline in Southern China (including Hong Kong), the Philippines, and southern Malaysia (Tioman Island; just off the southeastern coast of Peninsular Malaysia). But despite it’s seemingly wide distribution, individual populations are facing threats ranging from habitat destruction and degradation to overfishing for the aquarium trade.

Freshwater Life Project is a registered charity working towards the conservation and better management of freshwater habitats and resources worldwide. Click the banner to see how you can get involved

Whilst it can be a gruelling process to influence everyone (ranging from the individual villager to large-scale corporations) to implement changes to prevent or reduce habitat destruction, the aquarium industry may hold the key to solving the problem in the short and potentially longer term. As far as is known, no-one has yet been able to replicate the complex breeding process of Stiphodon in aquaria, however, efforts to better understand this process and the requirements of young developing Stiphodon fry would open up doors for the establishment of captive breeding programs. Coupled with habitat protections, population monitoring and sustainable collecting, this would this allow for the creation of livelihoods which incentivise the protection of these habitats, under the proviso that careers involving habitat destruction did not pay higher. With this simplified and hopeful concept in mind, as the world begins to better understand and slowly implement climate-responsible changes, do we within the aquarium sector, aquarist and business alike, need to start asking ourselves how we can do more to protect the future of freshwater ecosystems, and ultimately, our hobby?