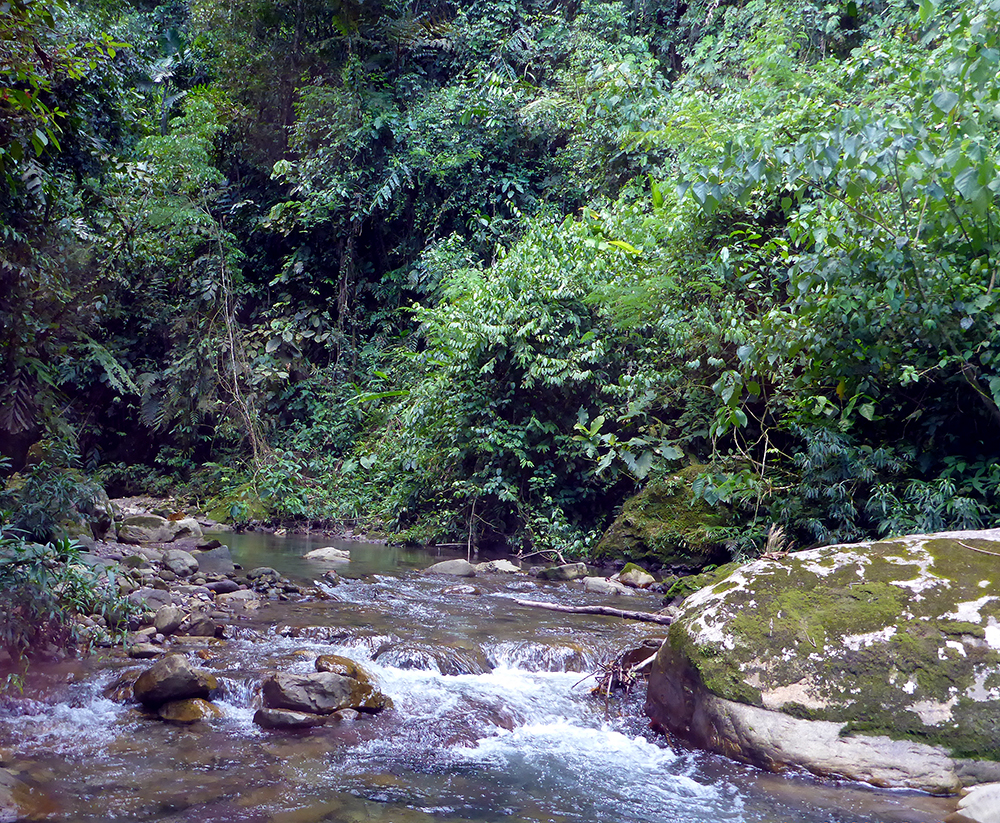 In recent years I have made several visits to the states of Cusco and Madre de Dios in Peru, and have collected fishes in a great many location, from the low levels of the rain forest rivers and streams up to 1200 meters in the Andean cloud forest. All of the sampled rivers and streams eventually drain into the Rio Madre de Dios, which in turn drains into the Rio Madeira. 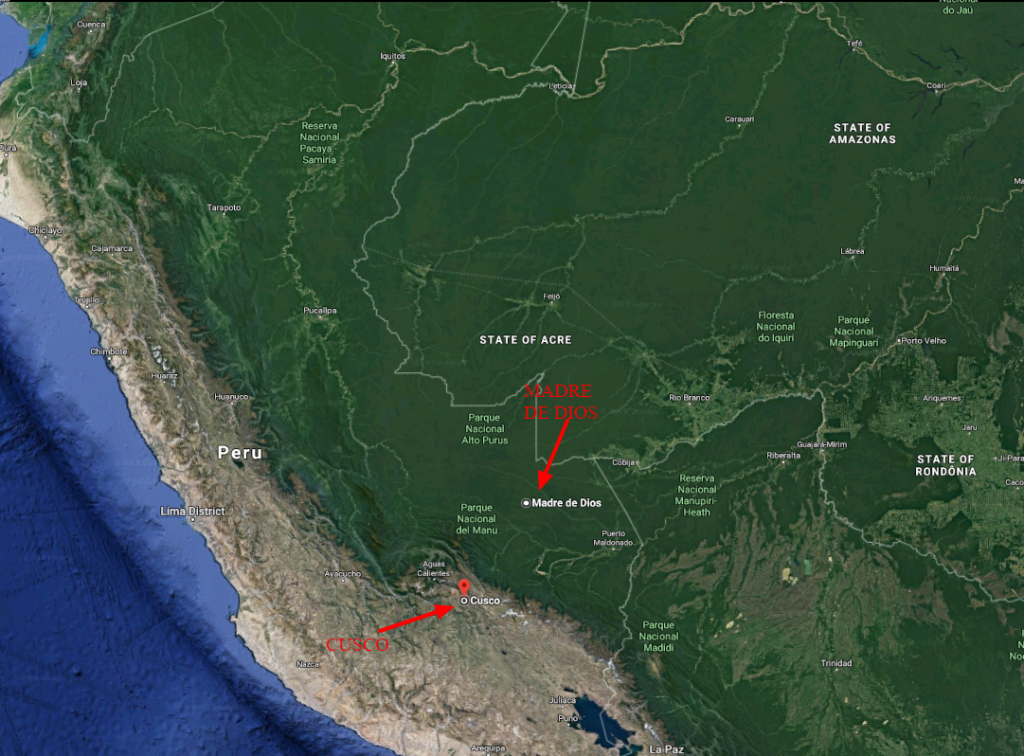 Here I will try and show the biodiversity, not only of rivers and streams, but also in the flora and fauna that surround them. Our home base is situated in Puerto Maldonado, but for this article we will start from the highest areas that we sampled, and work our way back to base.. After a five and a half hour drive we based ourselves in a small town called Quincemil, which is situated in the foothills of the Andes. 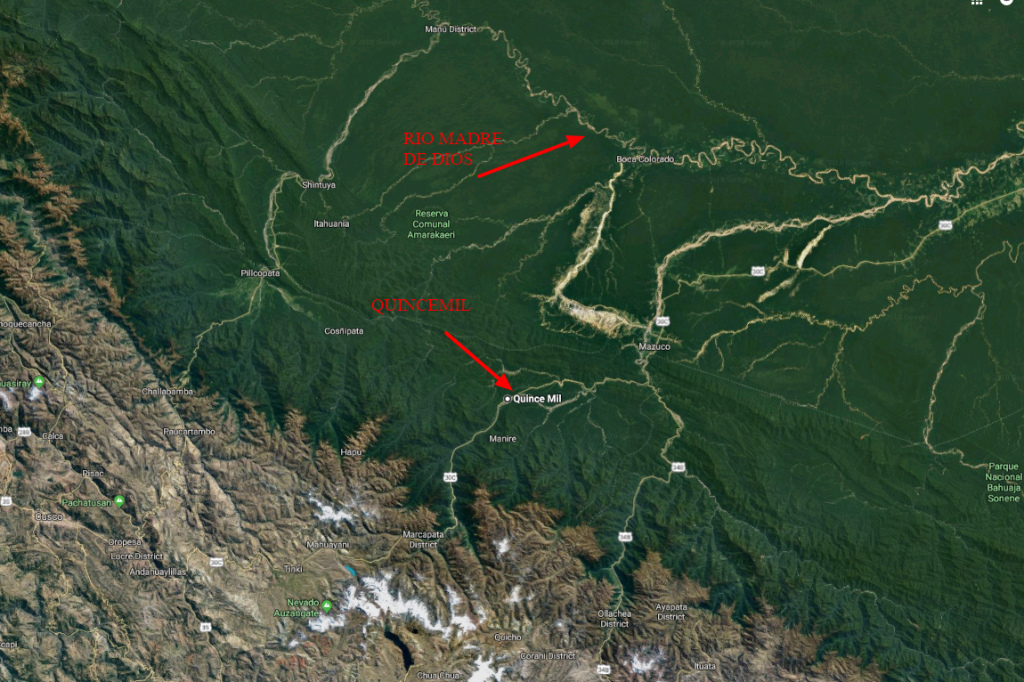 Our first sampling area was a feeder stream to the Rio Araza at 1236 meters. The stream was between one and two meters wide, and in places was up to a meter deep, with a wide range of varying sized rocks and boulders, and with the fairly steep incline, many forming very powerful waterfalls. The power of the water is such that moving around amongst the rocks in the stream is quite difficult and not without risk. 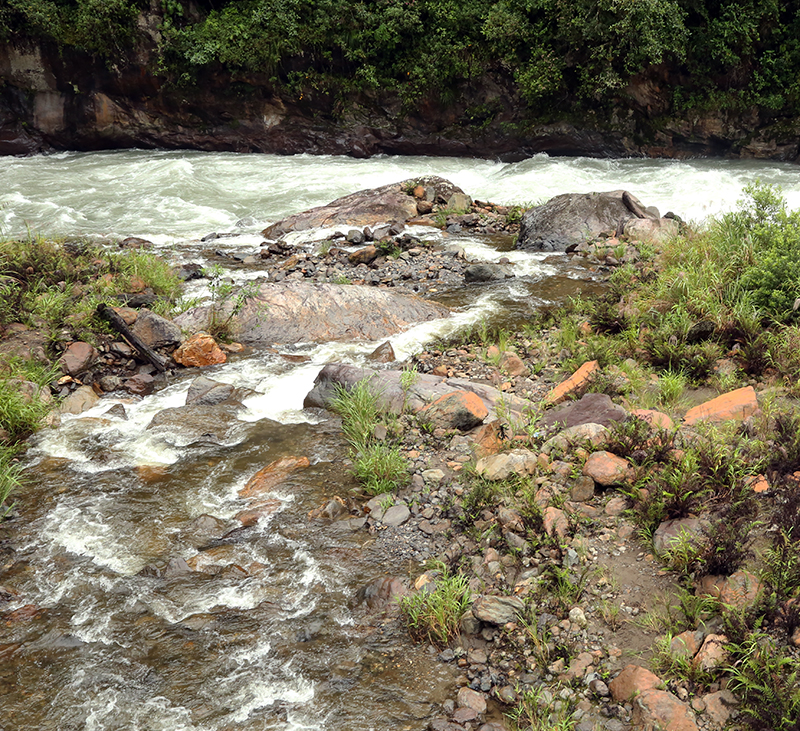 Riffles at the confluence with this shallow tributary and the main Araza River were home to Astroblepus sp. (below) 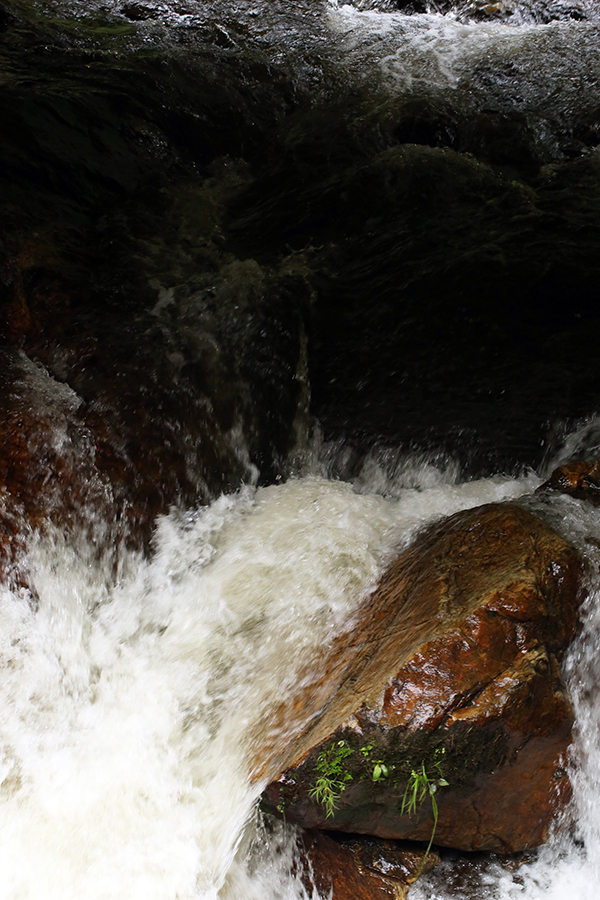 The only vegetation found in these streams are a few mosses and grasses that have manages to root themselves into small crevices and cracks in some of the rocks, or maybe some algae.  The water is so powerful that it is only the toughest of plants which can survive. In the background of Fig 1 can be seen the main Rio Araza, which at that time of year (mid April), has a very powerful and dangerous flow. Fig 2 (above) is a close up of one of the smaller waterfalls where we found several specimens of Astroblepus. 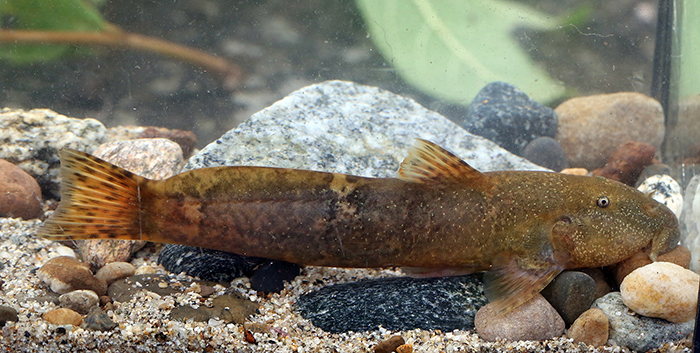 Astroblebus sp. collected in the fast flowing tributary of the Rio Araza

As we progress to lower elevations the streams still flow at a fairly strong pace, but with the water being shallower the opportunity for other species to exist gets better. 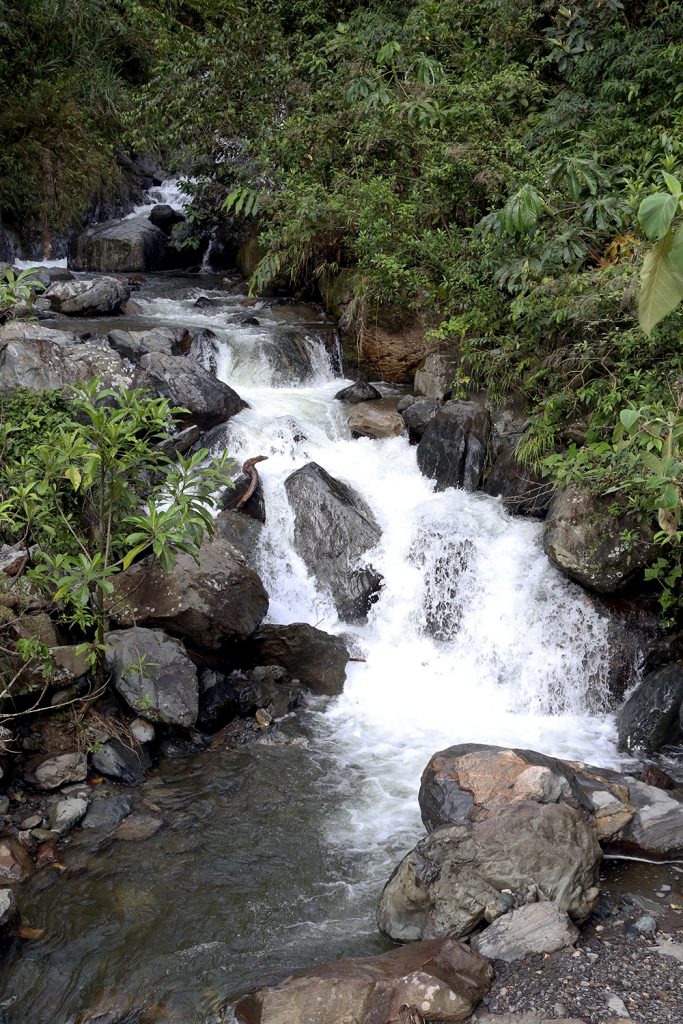 These are high altitude streams and again there is very little vegetation, the only time there is vegetation in the water is when the streams are in spate and the water rises above the plant line. In these streams and small rivers we find Astroblepus, Ancistrine species, Bujurquina cichlid species and some tetras. Figs A1, A2, A3, A4

Bujurquina sp, an attractive cichlid of this biotope in the Madre de Dios region 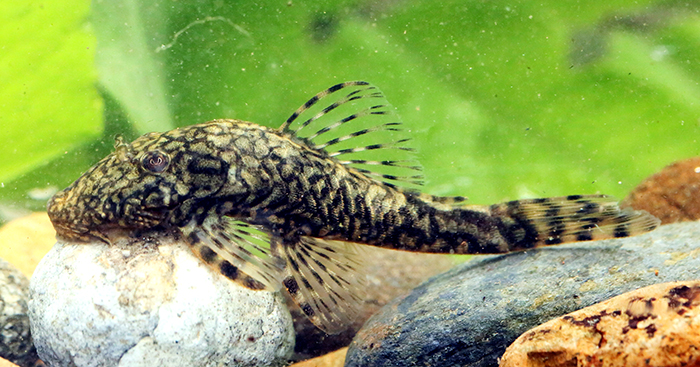 The beautiful Ancistrus sp. had gorgeous black and gold colours 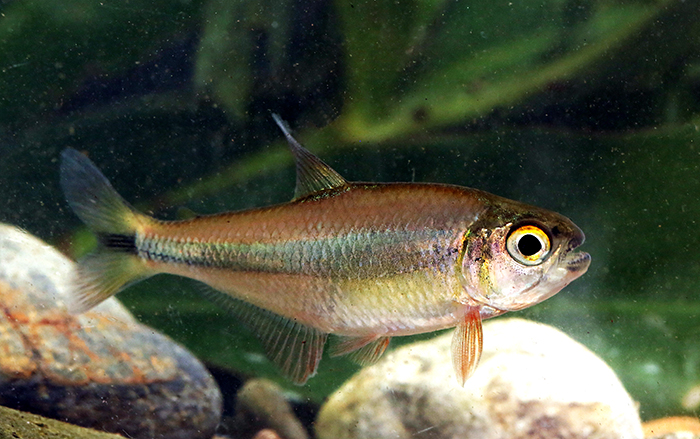 Because of the El Niño effect over the last three or four years, there has been a drastic lack of water in some areas and the some of the normally shallower streams have become inundated with grasses and ground vines.  This is very evident in the locations where Corydoras weitzmani and Corydoras sp. CW016 are found. 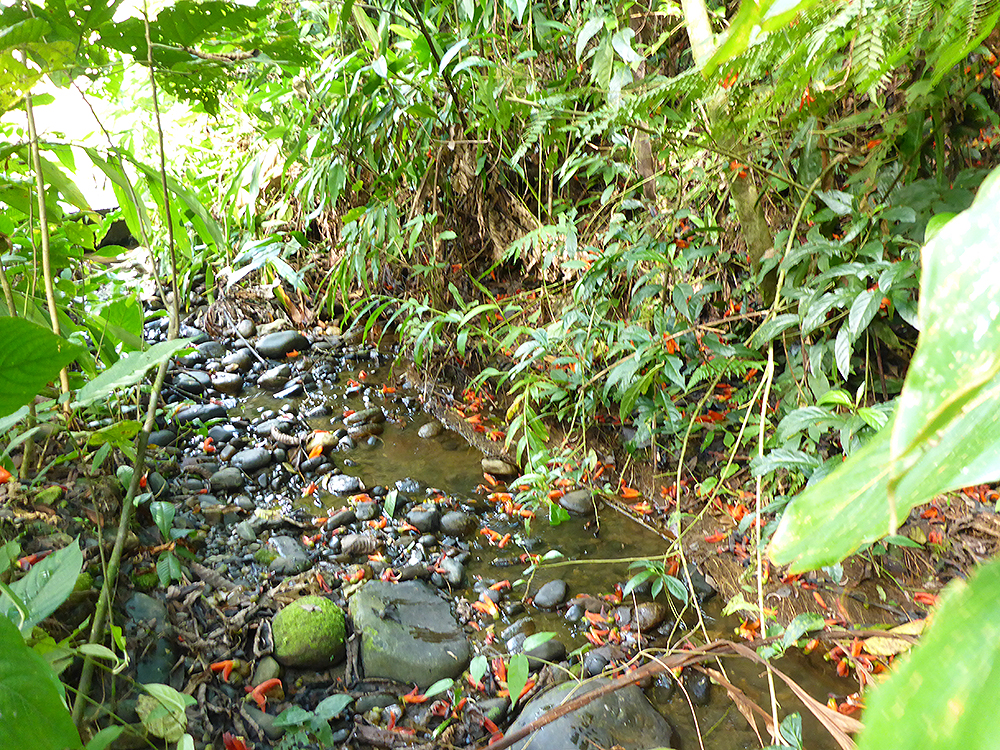 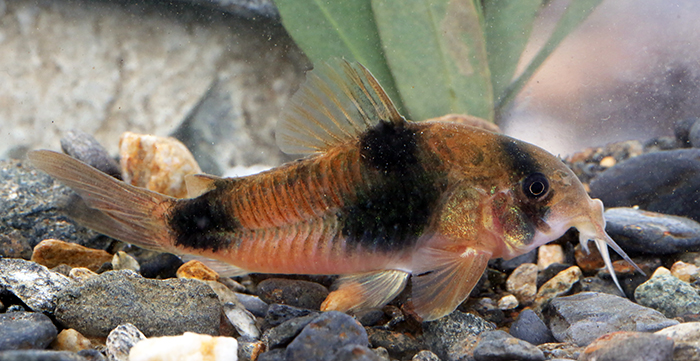 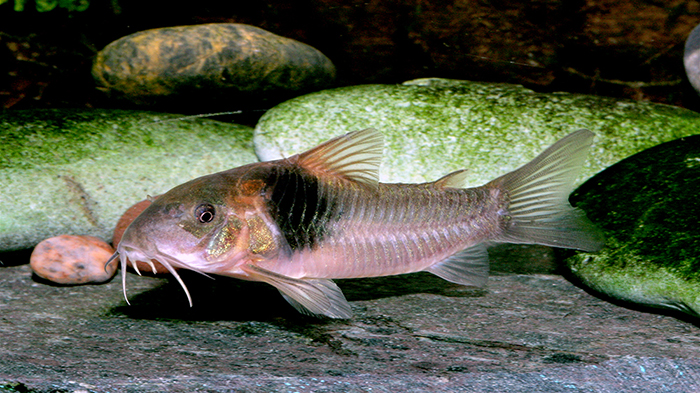 Much of his region is also greatly affected by gold mining activity (below), and vast areas are completely devoid of living vegetation, with some areas looking desert-like instead of lush forest. In some of the earlier mined areas the forest is reclaiming the land, and fish species have started to re-populate, but in other regions because of changes in mining techniques the land is being reworked. As well as the mining activity itself, comes the work force and new communities have built up, and in some places these have grown into quite large towns, which in themselves creating even more land contamination through sanitation and waste. 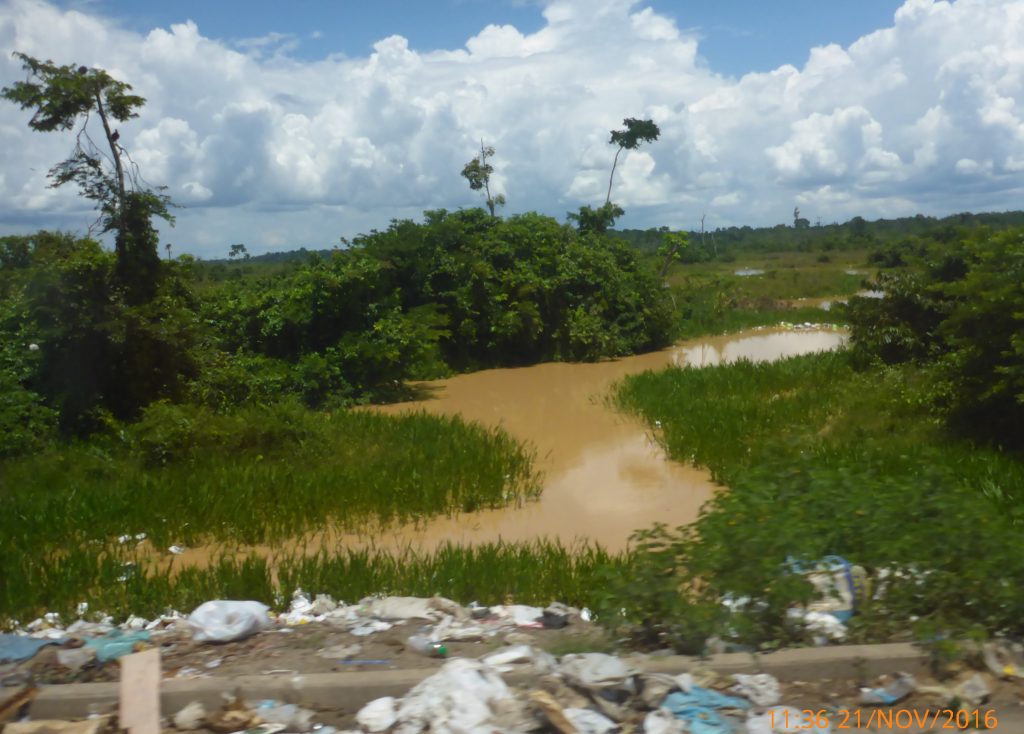 As we progress down into the lowland rain forest regions the terrain changes quite dramatically, and so do the changes that have occurred over the last 10 or 12 years. Intensive farming has made dramatic changes especially to the land areas bordering the new trans-continental highway, which connects Lima to Rio de Janeiro. Many of these areas have had the forest cut down to create grazing for cattle, Papaya plantations, and even rice growing paddy fields. 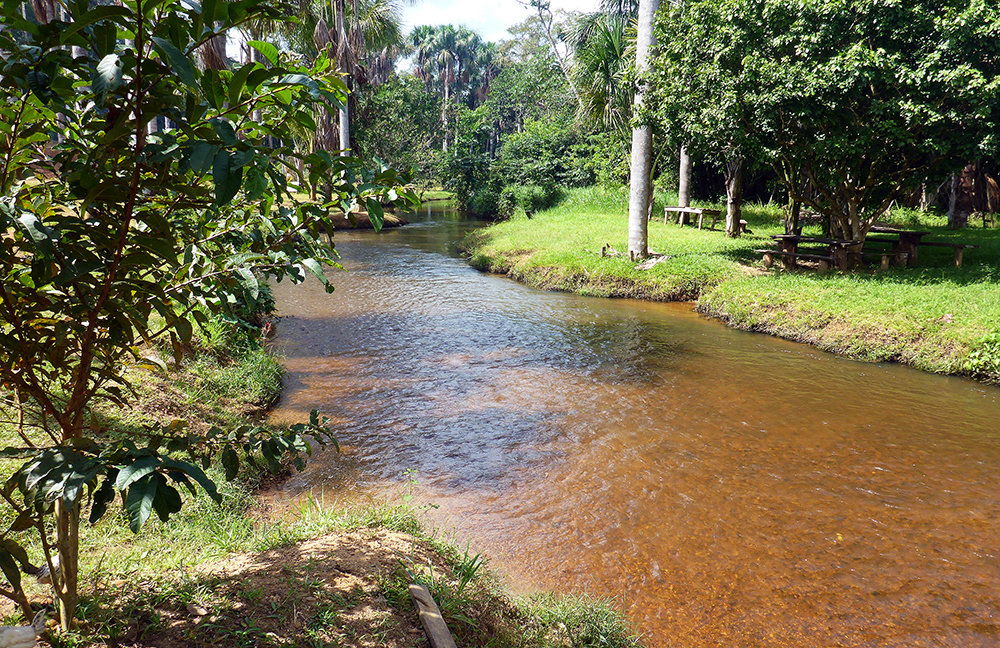 The water ways in these lowland regions have been affected is a number of ways, non-more so than they have been opened up to direct sunlight. The main effect being that fishes are more exposed to predatory birds and animals, although the lack of forest cover has also reduced the populations of wild life, which in all likelihood has moved back with the receding forests. It is hard to say if the fish populations have been directly affected by these changes, but it is almost certain that they will have migrated to areas that have not been changed, or at least not so much. 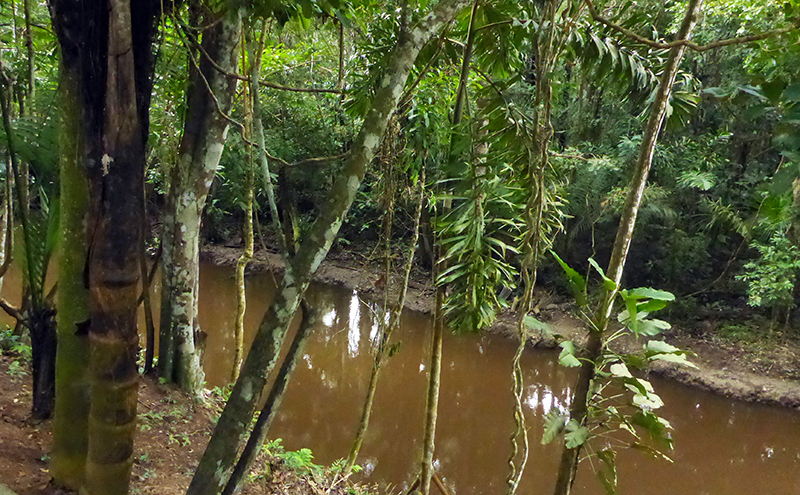 The building of the road itself, which was completed in 2012/13 did cause localised temporary devastation/disruption where road bridges were built, but the recovery appears to be very quick and within two or three years the waterways passing under and adjacent to the new highway have recovered and now appear to be very well populated. Many of these roadside areas have been developed into places where families take their children for a few hours fun and enjoyment. Others are, and probably always have been places to bathe and wash clothes, and or their vehicles. Fig 11 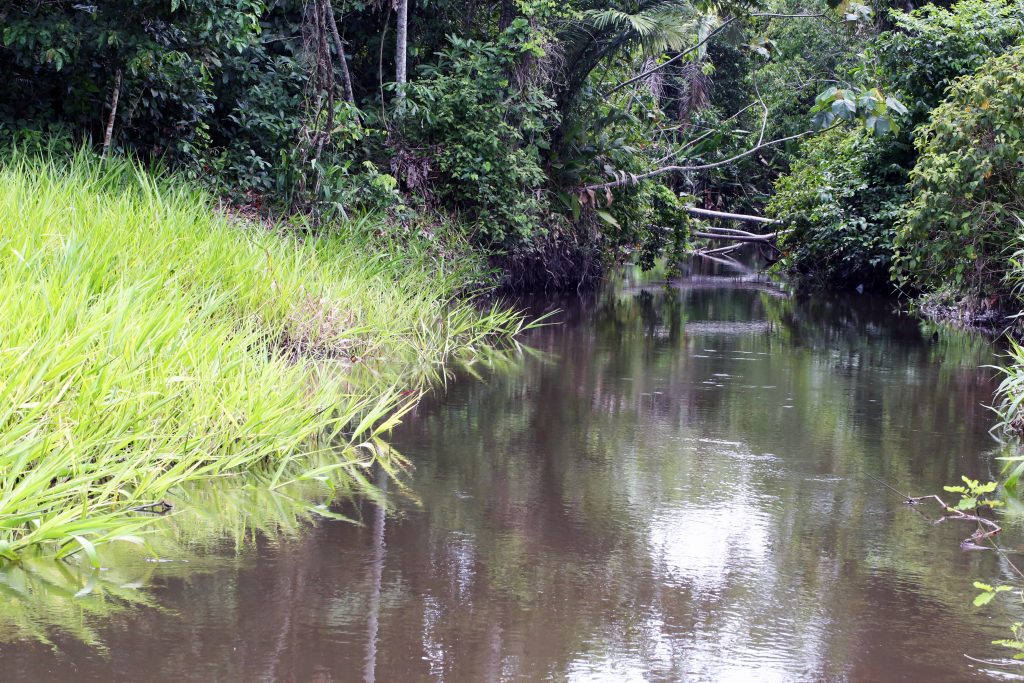 Because of the ease of mobility the lands adjacent to the highway are now being de forested for several purposes, Papaya plantations have expanded at an alarming rate, and large areas have been cleared to make cattle ranches, there are also large areas of marsh/swamp lands that have been turned into rice paddies. In the four years that I have been visiting the region the changes have been quite dramatic, and it is becoming more and more difficult to view virgin forest from the highway. All this change may be good for the peoples of the region giving them a sustainable living, but I wonder how the wild life is really coping with the daily reduction of their habitats and how many are becoming extinct because of the changes. I do know and have seen some areas where small traditional farmers work their land on a rotation system and this has little effect on the natural environment.