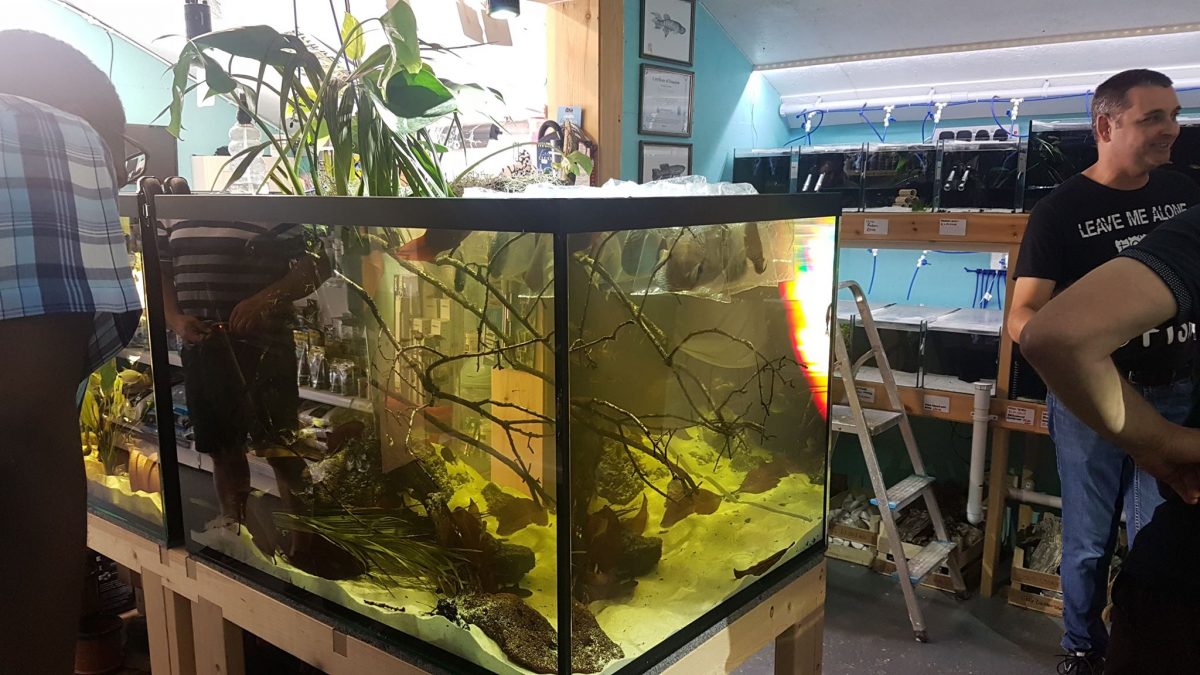 This Sunday just passed I was invited by the guys over at the well known aquatic store The Fish Barn in Crawley, West Sussex to join them for their “Discus Day” event. The event started at 10am, went on until the late afternoon around 5pm and as well as the great variety of domestic and wild discus available, there were plenty of discus related goodies on show as well. The reason for my invitation was to construct an authentic discus fish biotope aquarium as part of the discus themed day and help raise funds for the Freshwater Life Project, the charity I co-founded in 2016 which aims to conserve inland aquatic ecosystems with a particular focus (but not exclusively) on freshwater fishes.

I arrived in the morning at around 10.30am, not long after the event began and as always, was made to feel extremely welcome by Alan and Elliott, the father-son duo who own and run the store; there was also a decent turnout of customers waiting for the main event to begin so I wasted no time getting started. In the run up to the day Elliott and I had discussed what was required to make this aquarium biotope-correct, but our time frame was very short with just about a week to source everything we needed – including fishes and some décor items! Nevertheless, I sent him a detailed list and surprisingly, within a few days he was able to source most of what we needed with just a few substitutions on the fish list. 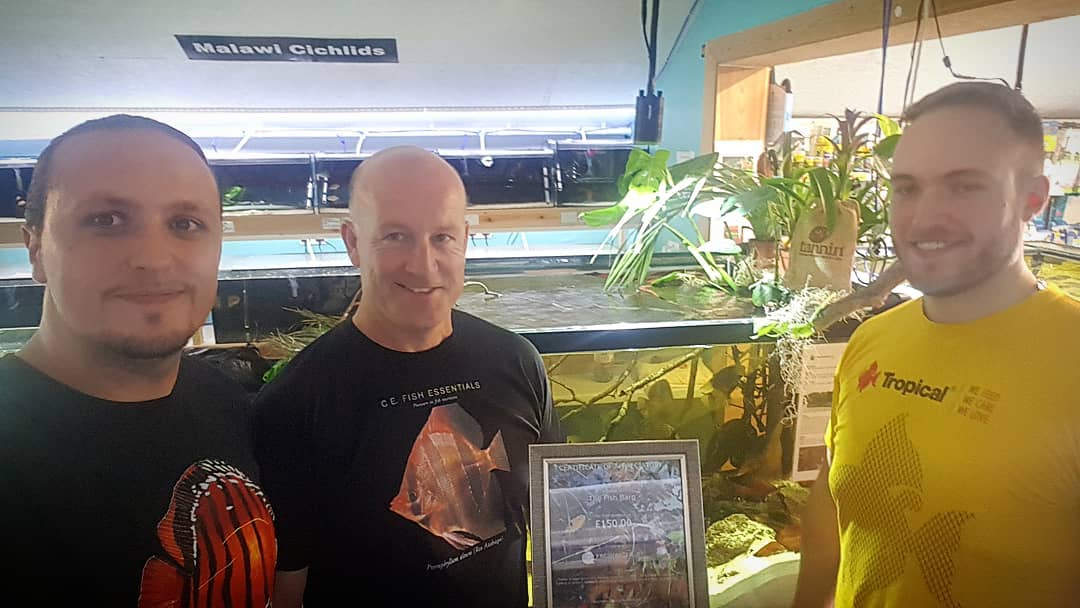 Father and Son team Alan and Elliott made a donation of £150.00 to Freshwater Life Project as a gesture of support and helped to raise a further £115.00 in donations on the day

The aquarium was to be based on the Lago Nhamunda in the lower Nhamunda River region which is home to populations of blue and brown discus (Symphysodon haraldi) among various other species which I have listed below; those in bold were used for this aquarium and the others are species which form the biocoenosis frequently found in that biotope alongside the discus fish. 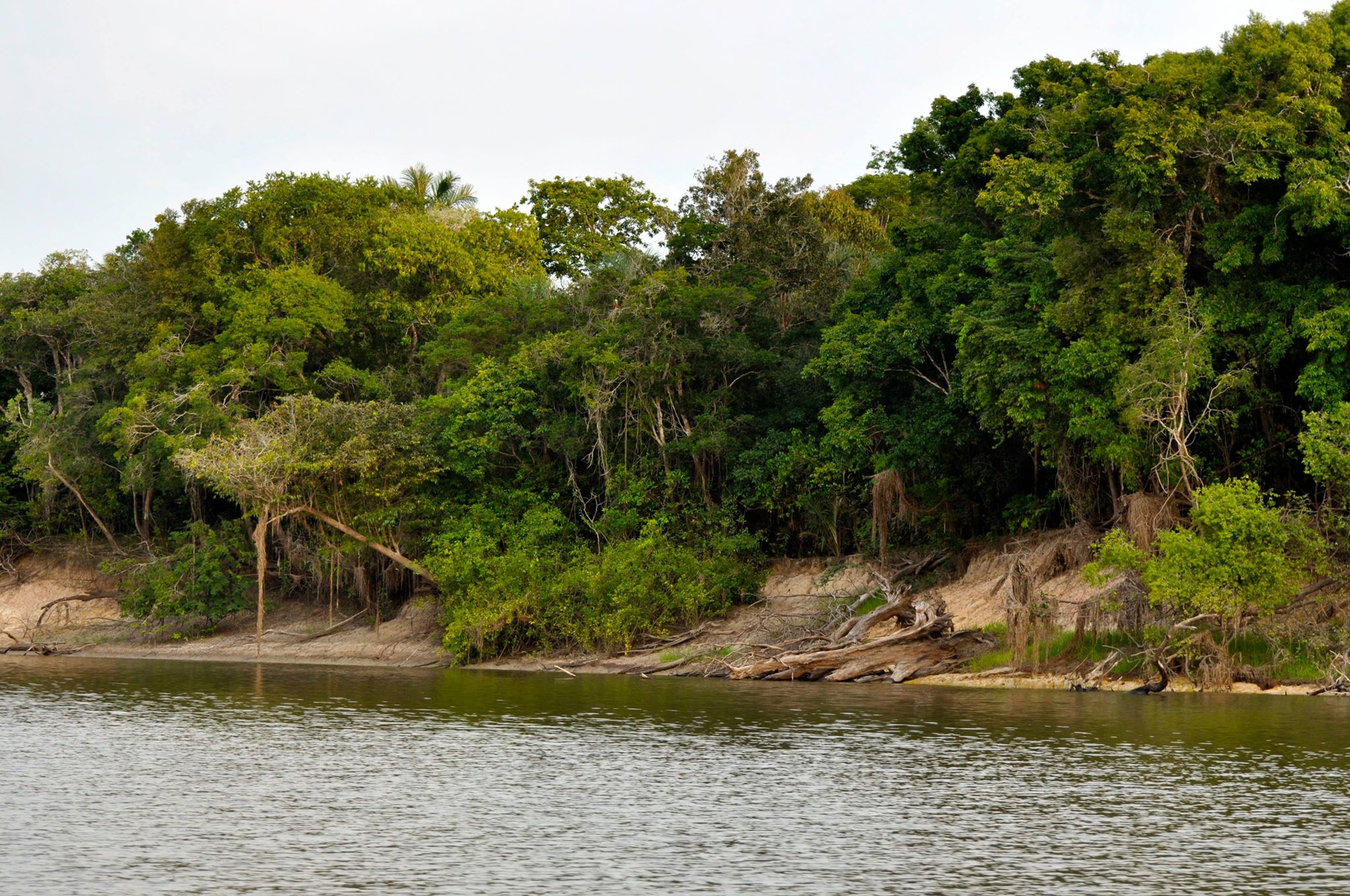 An interesting aspect of the Nhamunda River, a tributary of the Amazon River which is predominantly of blackwater origin, is that as you ascend it the river becomes progressively less wide, turning from a lake-like structure to a more typical river structure, but it also becomes considerably more tannin stained since the water capacity is lower and there is no inundation of the varzea forest by the white waters of the Rio Amazonas. In the lower stretches this white water inundation has considerable influence on the composition of the water and the contrast in this composition also seems to act as an ecological barrier controlling the geographic distribution of the discus fish which live there. In the lower, wider, lake-like region where the blackwaters of the river flow into the aptly named Lago (lake) Nhamunda and mix (particularly during the seasonal inundation) with the turbid white waters of the Amazon River you can find Symphysodon haraldi (the blue and brown discus), but upriver in the blackwaters of the Rio Nhamunda there are only populations of Symphysodon discus, the Heckel Discus – a species which to this day have only been found in blackwater habitats.

There is one exception however, to this rule and the reason for this is part of much debate. It is believed that as a result of bad practice in the ornamental fish collecting trade, a trade which is a very important income generator for local communities and one which incentivises protection of the natural habitats as opposed to destruction of them, there have been introductions of Heckel discus to the Lago Nhamunda, possibly by fishermen, which have resulted in mixed populations and hybridisation of the two species. For arguments sake though, I must include that due to the graduating change in composition of the river this hybridisation may also be a result of natural crossover and I am yet to come across evidence for the human introductions despite it being “well known” and spoken about. Anyway, precisely for this reason, when Elliott mentioned that he also had one spare Heckel discus and wanted to know if we could include it in the biotope tank, I thought it may be a good idea to include it for the purpose of highlighting this important conservation issue – so in it went! 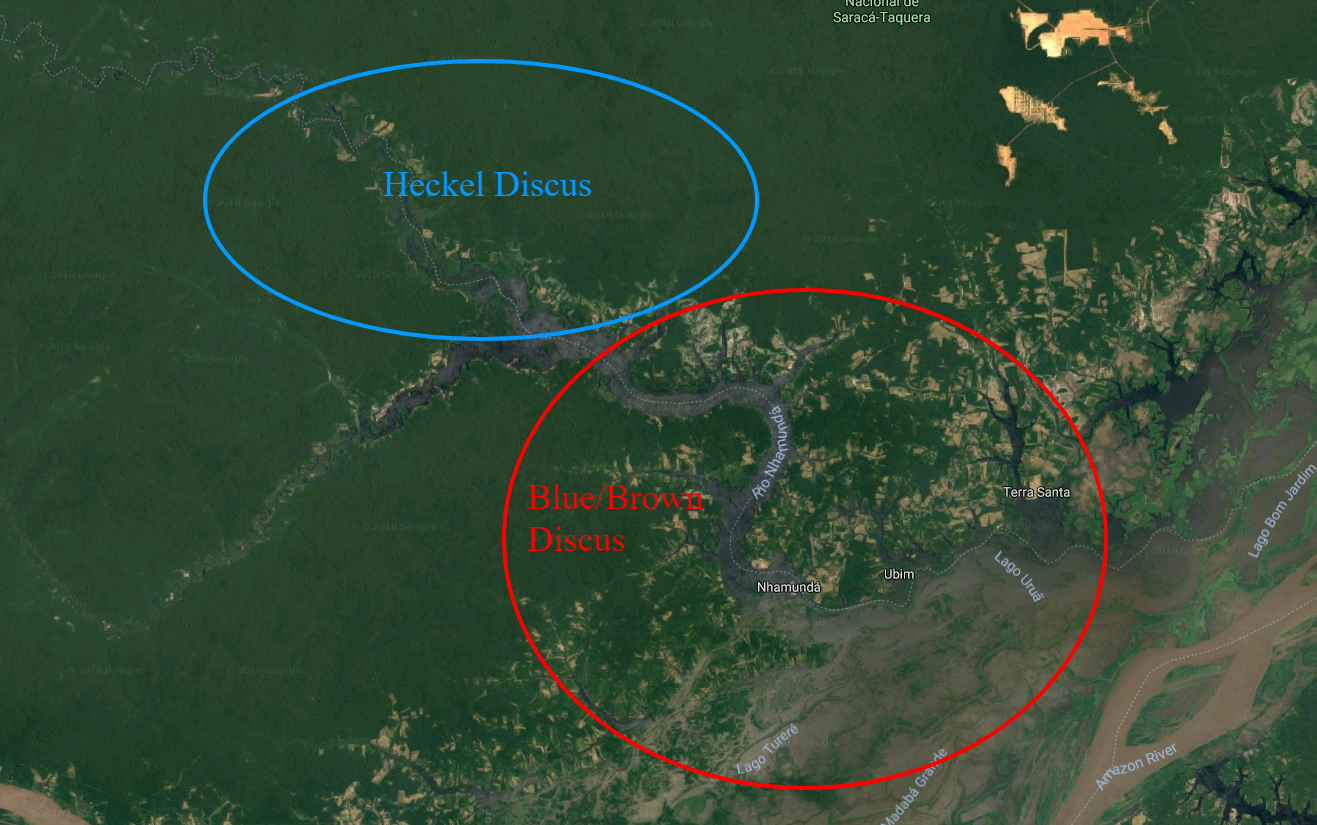 Symphysodon distribution in the Nhamunda River is not straight forward but it seems that the changing water composition acts as a distinct ecological barrier between S. discus and S. haraldi.

The tank was already very mature, running on a very efficient external filtration system and has an RO inlet for top-up just above. The discus were also already housed in the aquarium previously but had been temporarily moved for the re-scape, so from a microbiological perspective everything was perfect. For the design I wanted to recreate the sloping river bank habitat at the edge of the varzea forest; “varzea” is the Brasilian term for the forest which becomes flooded during the rain season. The river banks comprise a combined substrate of white sand and leaf litter from overhanging trees in layers alongside intermittently placed dark red/brown/black laterite rock assemblages with a rough texture, so in order to simulate this I asked Elliott to get some Lava Rock and to my surprise he was able to order some with exactly the right colour (as opposed to the more common red type) and this made the hardscape all the more authentic; in this area there are also fallen logs and branches due to gradual erosion of the river bank by the water –  and roots from riparian flora reaching the surface. 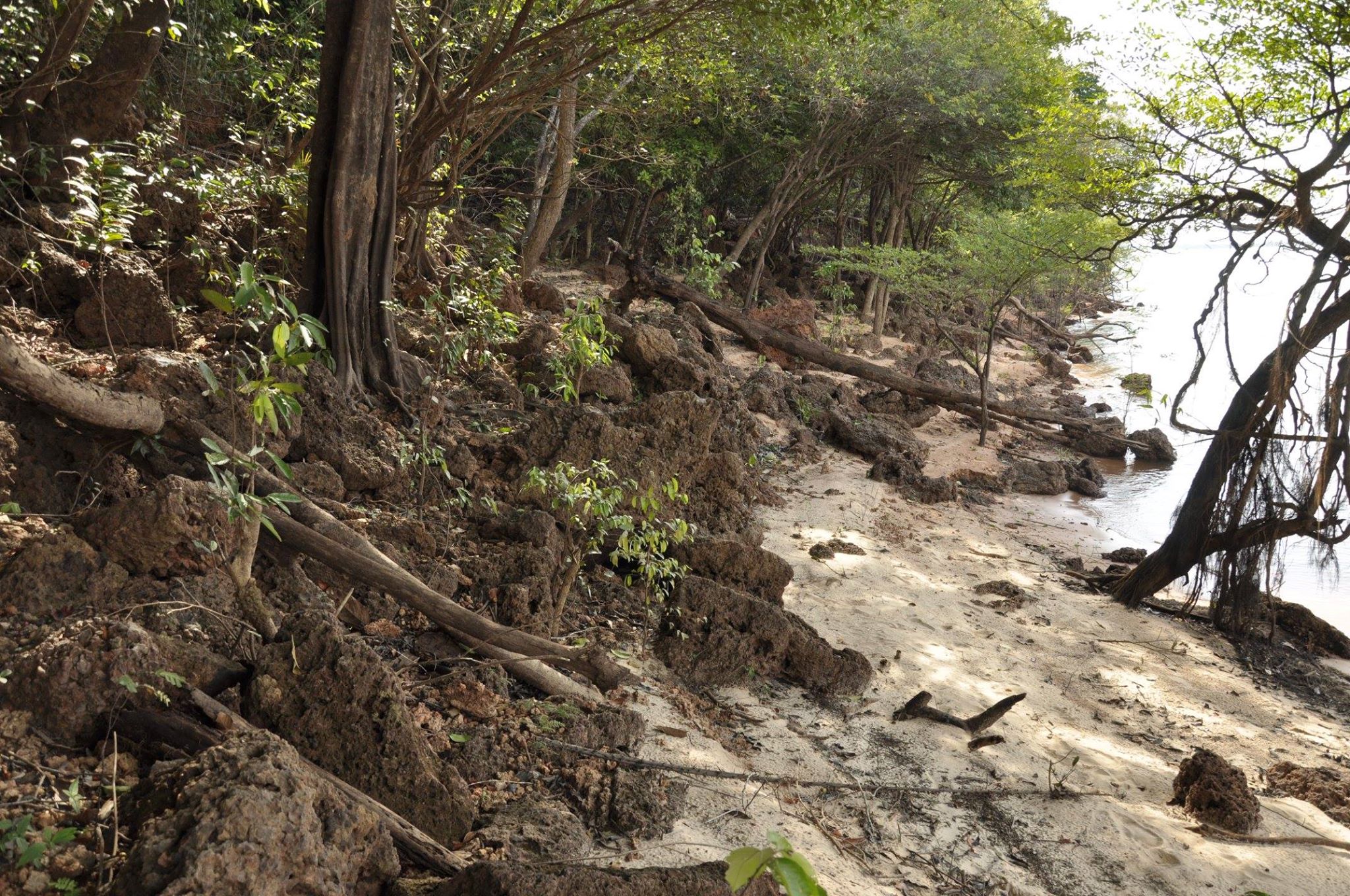 The abiotic parameters are quite broad as it is a variable habitat depending on the time of year etc, but pH typically varies from around 5.8 – 7.2 (but as low as 3.9 at the higher extent of their range during the dry season) conductivity around 30 µS, temperature on average around 27.5°C would suffice and turbidity could be considered low/moderate; light would penetrate this area but overhanging and submerged foliage plus fallen branches would provide shaded and protective areas while the water surface would give a rippling effect. 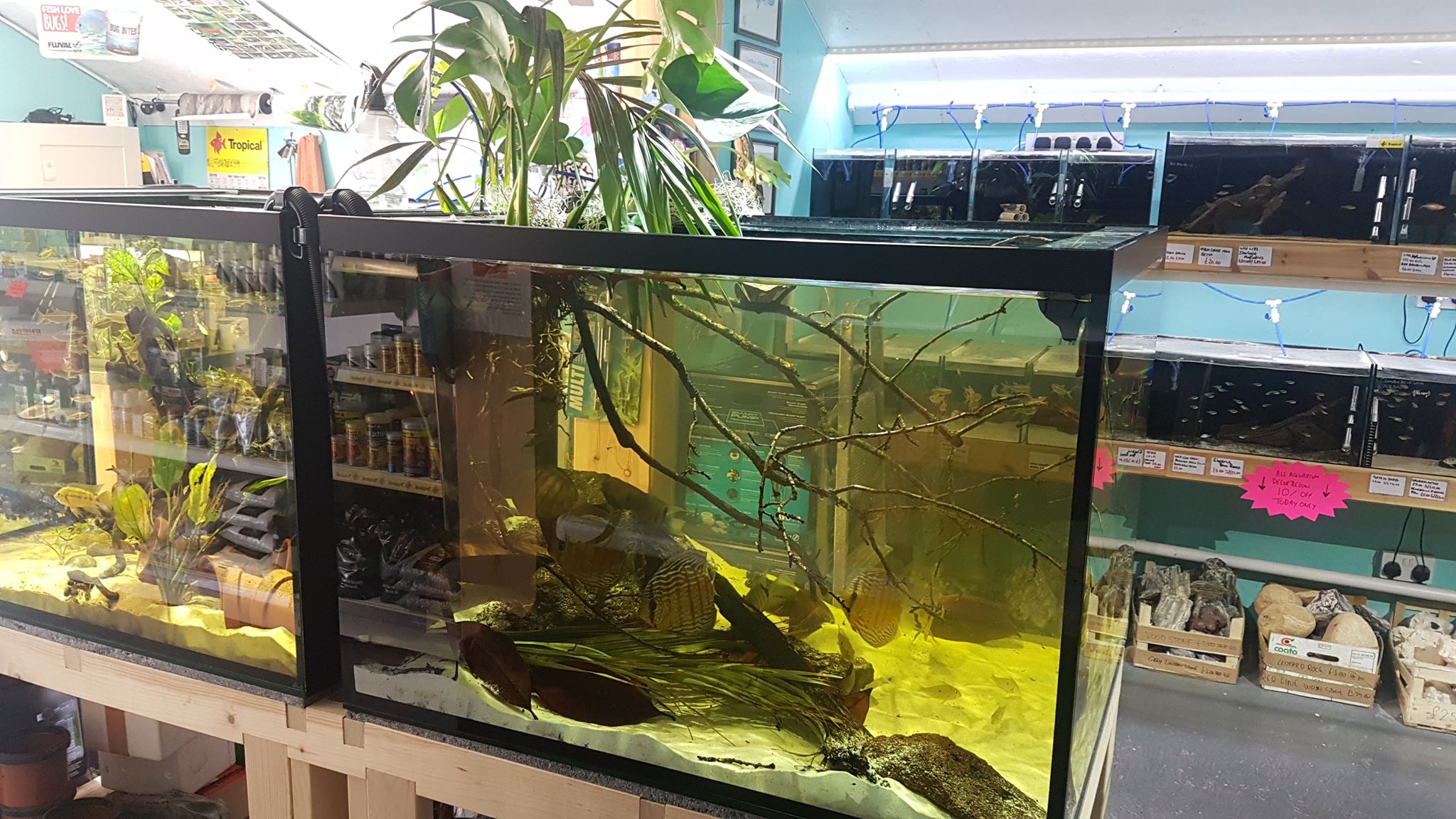 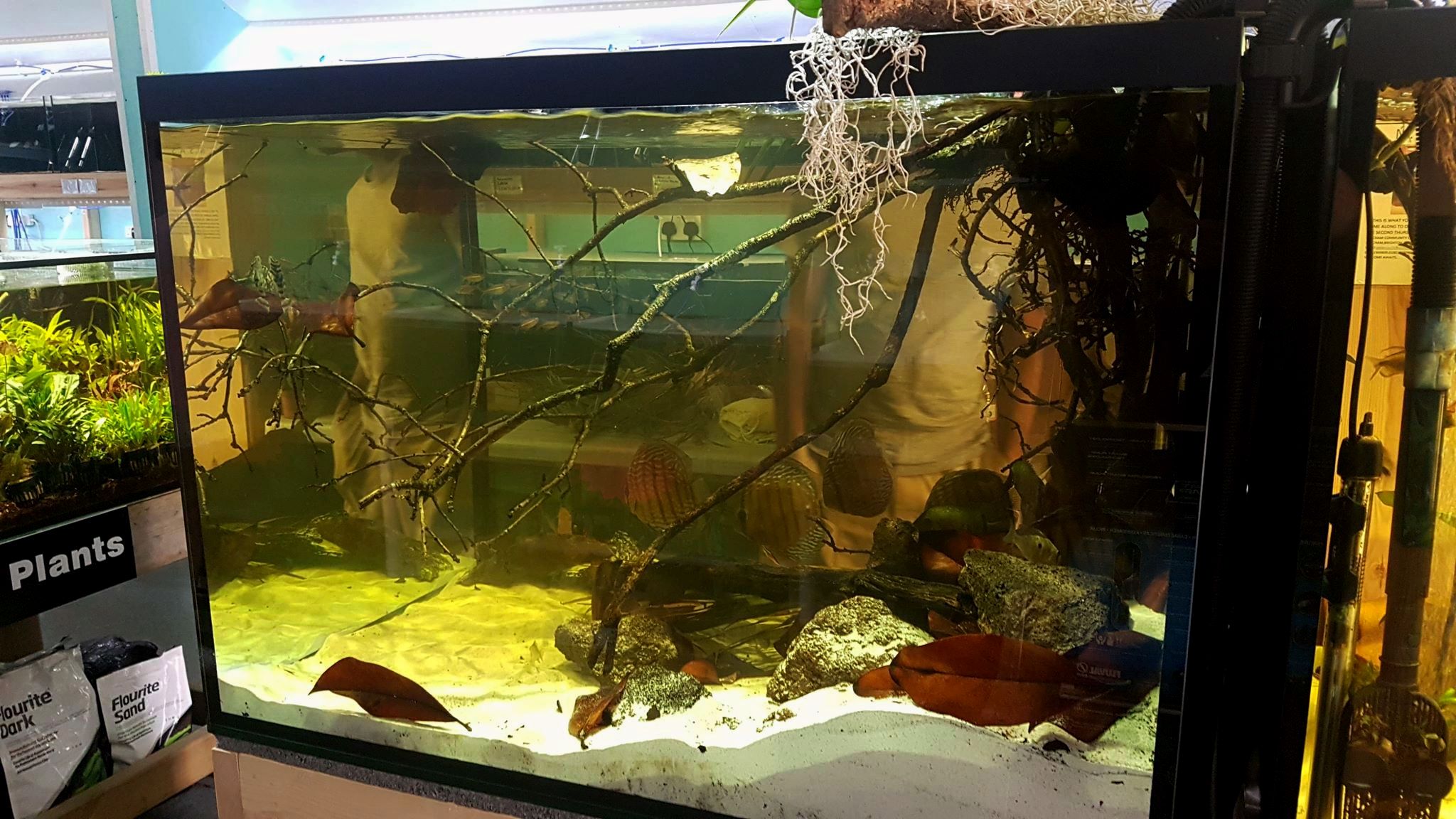 A great friend of mine, Mr Hudson Crizanto from H&K Ornamental Discus recorded one of his trips to collect blue and brown discus in the Lago Nhamunda in 2009 (below). During their night time collections (when the fish are asleep and easiest to capture), he provides some great insight to how they live and it exposes one of several habitats of the species where rocks are present – something not considered common knowledge to the average discus keeper.

Some interesting additional notes about the fish species in this biotope aquarium are that I have included one Heckel discus as a conservation statement (as mentioned) and for lack of availability have substituted the Heros found in the Nhamunda area for Heros liberifer (so it is only correct to genus level); I was also informed this morning by Elliott that after just one day in their biotope a pair has formed! The Tatia sp. used was T. musaica, but in the Nhamunda there is a T. aff. musaica which is yet to be formally identified and which looks VERY similar to T. musaica, it also lives alongside a similarly patterned Centromochlus sp. – possibly both benefiting from the mutualism; Peckoltia vittata also exploits the crevices in the rock formations and the fallen tree branches. 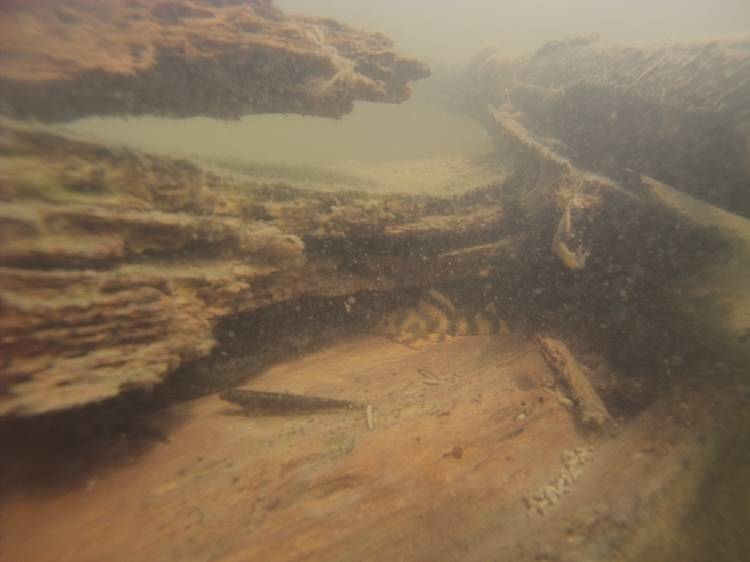 A photo of Peckoltia vittata in situ taken from the scientific article https://www.ncbi.nlm.nih.gov/pmc/articles/PMC4426332/

The substrate was a fine, inert white sand and I used Magnolia leaves as a substitute for Licania sp. which are native to the region and where discus are often found. I also used Psidium leaves which are another native species to the region and above the aquarium I used the terrestrial epiphyte Monstera deliciosa as a replacement for Monstera lechleriana, the roots of which I washed entirely of soil and submerged in the water while the bulk of the plant rested in the branches above the surface. Behind the aquarium and overhanging the waters surface I used a potted palm tree (Dypsis sp.) as a substitute for Euterpe oleracea as the leaves are almost identical in morphology, this created the exact “safety” feel I wanted to achieve, but with subtlety. Other botanical items used were the dried seed pod of Lecythis elliptica (also native to the area), which I allowed to float on the surface as if having just fallen from a tree above; botanical décor was supplied by Tannin Aquatics specifically for this aquarium and I must thank them explicitly for that. Click Here to download a full breakdown of this biotope to create at home.

For those interested in exactly how I put the scape together, in the video above you can watch the first hour of the actual demonstration filmed by The Fish Barn on their facebook page – scroll down for close up video.

After the “scaping” was complete I managed to sneak a moment to grab a small snack and was shown the incredible discus sponge cake which was prepared by the very talented Anita, the wife of one of the attendees; I made sure to take a slice home when I left. 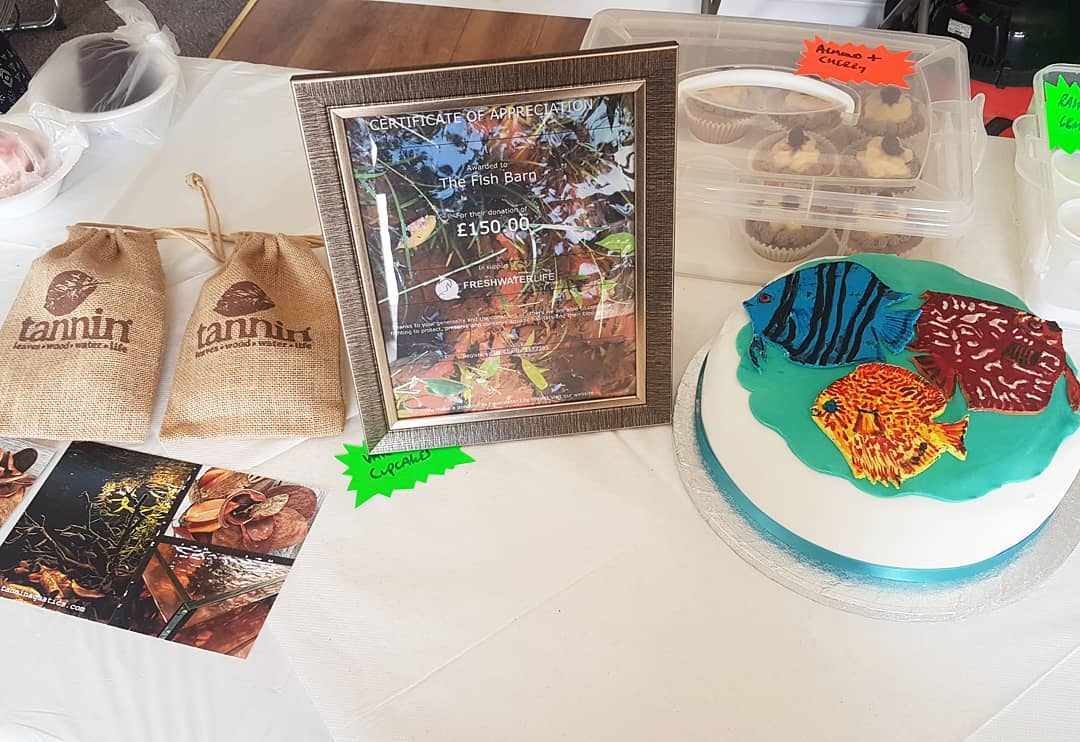 The fishes were floating in their bags acclimatising for approximately 20-30 minutes, I always make sure to check the temperature difference between the bags and the aquarium to know whether to mix water right away or allow some time for the temperatures to equalise first before mixing; I feel this method gives a little extra respect to the fish and makes it a little easier for them to adapt on introduction. The discus I left until last so that on introduction they would already have other fishes around them, all of these little things add up to a successful establishment of a new biotope – the idea is to create a sense of equanimity and then rightfully accredit it to nature.

Safe to say, the fish settled almost immediately and after an initial 4-5 minutes of analysis they were out and about inspecting their new biotope in such a calm and content way that I felt a great sense of emotion – especially after Elliott remarked that their colours had intensified so much in comparison to before.

On the whole, with the great turnout, the wonderful effort from everyone involved and the homely and welcoming environment, I can say that it was one of the best days I’ve had in a good while – since my last biotope anyway. – P.s. dont forget to donate guys… (click banner)