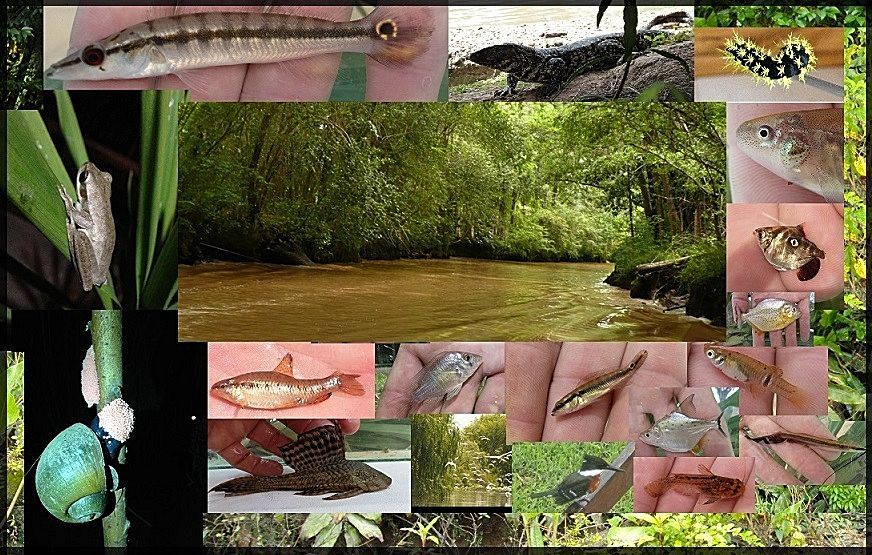 For many years, when thinking about ornamental fish, I wonder how this paradise of species has not been better recognised and appreciated. This Argentine delta is a unique place, unlike any other similar habitat in the world. It is a beautiful wetland, a magical place with lagoons, jungle, grasslands and floating islands that form in the space of just a few years and are constantly mutating to give birth to new biotopes for different species – this place is so very rich in biodiversity. Firstly, to appreciate the size of this Eden of ornamental fish it is instrumental to know that this river basin is the second largest in the world with an area of 3,200,000 Km². It is one of the greatest attributes of South America with its extremely interesting hydrographic systems, that is even before considering it from an aquarist’s perspective. The Parana Delta is the penultimate phase of this water system which ends in the Rio de la Plata estuary.

Before I go on to talk about the Delta, I would like to explain a little about the Parana River, the main protagonist in my focus area. It is the 14th longest river in the world and mobilises a flow of approximately 16000m³ / second. The composition of the river is extremely high in sediment and includes approximately 25% clay sediments, which equates to about 45000 million tonnes per year of which, 15% is sand (25 million tonnes / year) and about 60% is silt (90 million tonnes / year). This large amount of suspended solids mostly comes from the Rio Bermejo and originates in the Bolivian Andes and it is this which has forms the mutating islands over millions of years, even in spite of the interventions made my mankind.

The Delta of the Paraná is one of many wetlands which exist in Argentine territory, considering that a wetland is an area which remains under flood conditions, or at least with its substrate saturated in water for a prolonged period of time. Characteristics of such places are hydromorphic soil substrates and both flora and fauna which are adapted the changeable substrates as well as to the greater ever-changing habitat. The Parana Delta is born in the city of Diamante which lies in the Entre Rios Province and this is where the so-called “pre-delta“, the 2548 hectare national park ends, approximately 5km from Diamante and eventually terminates in the estuary at Rio de la Plata. This Delta is divided into three parts, the Superior Delta: from Diamante to Villa Constitución in the province of Santa Fe, the Middle Delta from Villa Constitution to Ibicuy port and finally the Lower Delta from Ibicuy to the mouth of the Rio de la Plata. The length of the Parana Delta is 17500Km². The Parana Delta has extremely diverse wildlife, although sadly there are many species which either no longer occur, or simply occur in very small numbers among the islands, eg. Panthera onca (Jaguar), which gave rise to the name of the party of the province of Buenos Aires, “Tigre” (Tiger), just like the river of the same name. Other examples are, Yacare (Caiman), although these are also now only found in very low numbers here, Puma, Otters, Peccaries, Maned Wolf and the Yellow Anaconda. Most of these creatures are no longer found in the Parana Delta region. With respect to aquatic life, this area is located at a potamic subtropical epicentre of ichthyology with 182 species inhabiting its waters (according to research). Many of the species of the Parana Delta have significant importance within the aquarium hobby, many of which we photographed as part of this article to share with the rest of the world, the beautiful biota that exist within this little-known paradise in Argentina. The climate here is relatively mild, with regular average rainfall of approx 1016 mm throughout the year and an average annual temperature of 17.4°C. The cool season is from mid April and finishes in late August when the warm seasons begins and the average annual temperature is 24.5°C. There is more precipitation in the warm season and it is much drier in the cool season, the large volume of water in the region contributes to the high humidity of 75%, this generates a low thermal amplitude and aids in developing the humid subtropical micro-climate. The waters which originate in the Northern Argentine subtropics, recede in summer with temperatures often sitting at around 25-26°C, but occasionally a little higher as well. San Pedro: The characteristic point of the middle Delta. San Pedro, which is the abbreviated name for “Rincón de San Pedro Dávila de los Arrecifes”. It was originally a small town but was declared a city on 25th July 1907 as a result of its first Port, which enabled growth. It is just north of the province of Buenos Aires along the Rio Parana and north of the mouth of the Río Arrecifes. No small fact is the historically significant fact that within walking distance of the city, la Batalla de la Vuelta de Obligado took place on the Parana River, where Argentina gained independence from Britain and France.

20 Pesos note with Juan Manuel de Rosas on the front

Aside from San Pedro being an important part in Argentinian history, it is also important geographically as perhaps the most characteristic area of the middle delta. The worlds suppliers of ornamental fish from Buenos Aires, source their catches from here and today, several iconic species are collected in this area. For several years, we’ve had constant interaction with the Delta, but it was here at San Pedro that we wanted to come to document the habitats and ichthyofauna in high definition. Our aim was to go for a weeekend to document as many species as possible from this area and although on weekend is not always enough time to do this, we hoped to give aquarists a good indication of the species which are most abundant in this biotope. Biotope: San Pedro: We decided to try some different ways of fishing. It is very normal here for people to fish for consumption as well as sport fishing with the catch and release method. We opted for a large netted frame and adjusted the depth according to each biotope as was required; we built the nets at the location using the materials shown.

We started making a framed net providing just the right depth to reach right up to the the base of the floating plants, with the classic frame size it is not possible to trap those fish which are very fast and elusive.

We always prefer to build the net at the location in order to customise the size for the location.

Enrique assembling the net and frame

Parents fishing in the biotope under the watchful eye of our children, the future aquarists

Parameters show relatively soft water with conductivity of 239Us, a temperature in the early morning of 25°C and a pH almost neutral at 7.42 due to the high sediment composition mentioned previously.

Some of the fish we photographed with common names shown in parentheses.

Head detail: Notice that unlike Eigenmania trilineata the skin covering the gill region is translucent

Leporinus sp, perhaps a juvenile L. striatus but the stripes are not quite correct

“El Buzo”, is the name for this fish which is an insectivorous species known to travel along the waters surface searching for fallen terrestrial insects to eat – Auchenipterus nipripinnis. (Buzo)

Other species from this biotope photographed in aquaria:

Loricaria sp. guarding its eggs under some wood

Gymnogeophagus balzanii, a young couple. In the upper right corner the female is guarding her offspring, previously she had camouflaged their eggs with sand, covering them so they were almost invisible.

Ancistrus sp. A couple about to eat. In the upper right corner with newly hatched fry showing large yolk sacs and in the other corner a youth of about three months of age.