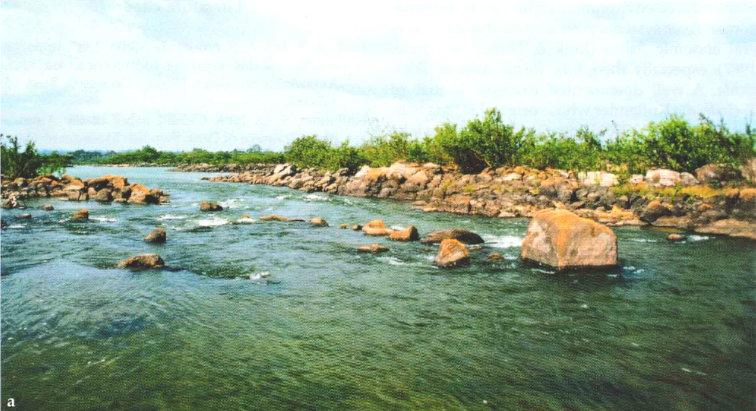 Teleocichla centisquama was described as a new species from the region of Altamira along the Rio Xingu in 2002 by scientists, Ivan Sazima and Jansen Zuanon. The following article includes excerpts from the species description and outlines a little about the habitat, plights and behaviour of this endearing, but highly threatened rheophilic cichlid.

T. centisquama dwells on rocky bottom rapids with moderate to strong water flow, It perches solitarily atop boulders, where it maintains its pectoral fins and hind body in contact with the rock and often adopts a sigmoid posture(possibly to maintain hold in the strong current).

On boulders of approximately 2-3m diameter, four individuals were observed spaced about 30-40cm apart. The fish forage on the rock surfaces in an intermittent sit-and-wait method picking at benthic and possibly drifting prey as well. Of the three specimens examined for gut contents, the predominant diet consisted of mainly crustaceans such as cladocerans, ostracods, copepods and immature aquatic insects including chironomids & ephemeropterans (present in all three gut analyses) and trichopterans, they even consumed minute clams; the species is subsequently considered rheophilic, benthic and benthivorous.

As of 2009 and prior to the construction of the Belo Monte Dam, the IUCN Redlist assessment, despite being “Data Deficient” for this species highlighted some graves truths..

“An electricity company is proposing the construction of a large dam on the Xingu, near Altamira, called Belo Monte and has plans for the Babaquara Dam upstream to store water during the dry season. As originally designed, Babaquara would flood 2,400 square miles of the rainforest. The Xingu dams complex would cause environmental problems such as flooding, drought and interruption of the river flow, thus disrupting the ecosystem (International Rivers Network 2006). If the dams are built then the habitat required for this highly specialised rheophilic (preferring fast-flowing water) fish will no longer exist. It is very likely that this species is threatened by habitat degradation. Members of communities situated on the banks of the Xingú say that pollution in the Xingu river is increasing; as a result of agricultural activities, such as the massive cultivation of soy beans, and cattle ranching, in close proximity to the tributaries of the river (Turner 2006). Satellite photos show that almost 30% of the Xingu River headwaters have been deforested (Greenpeace 2006), although it is not known how this would effect T. centisquama” (IUCN Redlist 2009)

Up to five different species of Teleocichla exist in syntopy with T. centisquama, namely T. monogramma, T. centrarchus, T. gephyrogramma and two undescribed ones, with each occupying its own unique microhabitat. This high number of syntopic species is noteworthy as congeneric cichlids are rarely sympatric in South America.

Damming and other man-induced environmental changes in the Amazonian river systems pose serious threats to several endemic fishes, especially rheophilic forms such as Teleocichla. A well documented example is that of Teleocichla cinderella whose original rapids habitat is now under the huge lake formed by the Tucurui hydroelectric reservoir, the status of this species being unknown. Teleocichla centisquama may meet a similar fate in the near future due to the planned Belo Monte hydroelectric dam, which would occupy most of its known distribution. (Zuanon & Sazima 2002)