The route of the Cardinal Tetra

One of the aquarium fish with more pages held in the books of hobbyists than Discus and Angelfish combined is the Cardinal tetra. More precisely, Paracheirodon axelrodi. These characids we could consider as the most popular tetras in the ornamental fish hobby, their distinctive color contrast and beauty makes them unique and although there are several similar tetras such as the Paracheirodon inessi (previously in the genus Hyphessobrycon) or P. simulans, they do not possess the elegance of that of the King of the tetras. Such is the importance of this characid, whole families livelihoods depend on their capture consistently surpassing other species. I have seen what the natives call “viveiros” along rivers with thousands of these nets which separate fish by size, as well as the typical plastic boxes containing hundreds of fish each occupying entire boats. In the collection centers where all the fish go to undergo quarantine before being exported, Cardinal tetras are always those who take up more square feet in their pools and have a section for themselves! Surely this is the most commonly extracted fish from Amazonas. Biology of the Cardinal Tetra 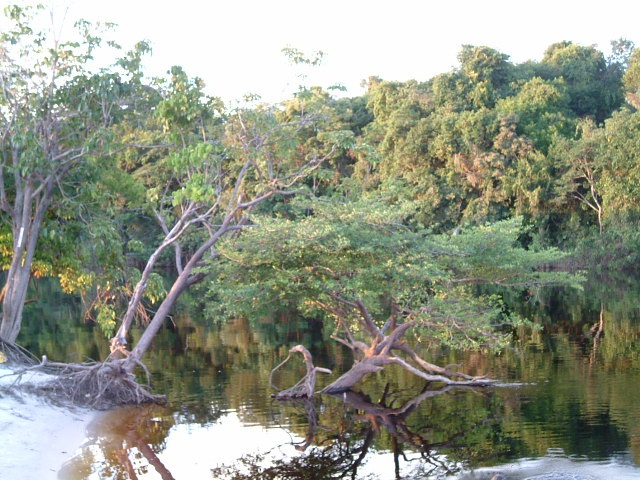 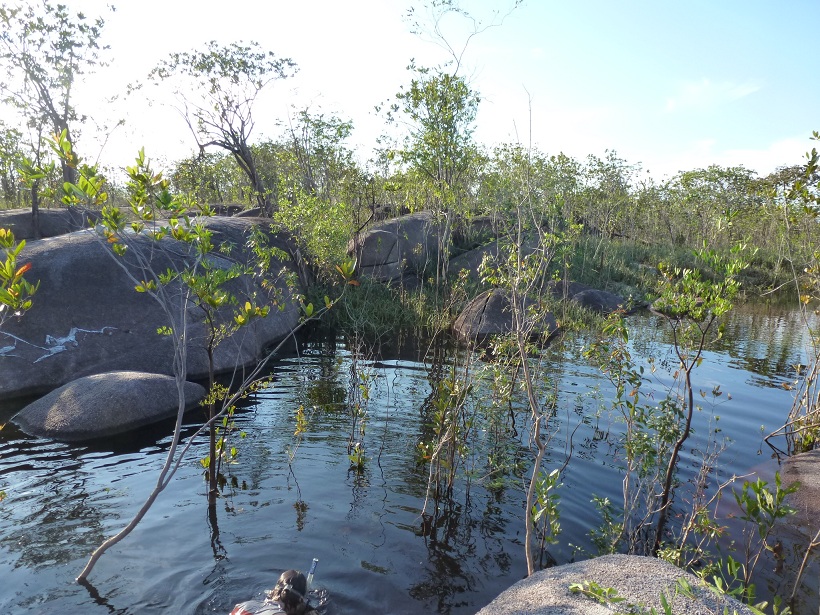 Fishing for Cardinals: “Every year, more than 20 million cardinals are captured during the official and regulated collection season (August to April) representing over 50% of exports of fish from Brazil.” (Heiko Bleher). These words from Heiko tell us how important this aquarium fish is for those indigenous families in the collection areas. It really is the case because most Cardinal Tetra fishermen prioritize this species instead of catching other fish required by the market such as Pistrellas sp. and various other tetras sharing the biotope including Hemigrammus bleheri (and the other two species Petitella georgiae and Hemigrammus rhodostomus). I have also seen inside boxes containing cardinals, stowaway fish such as Crenicara sp. which were unfortunately among the cardinals when captured. Fishing Methods: A camp is usually situated in the middle of the jungle in an open space to allow for the arrival of small vessels such as Voadeiras (Brazil) or Flying (Venezuela and Colombia) as well as canoes. 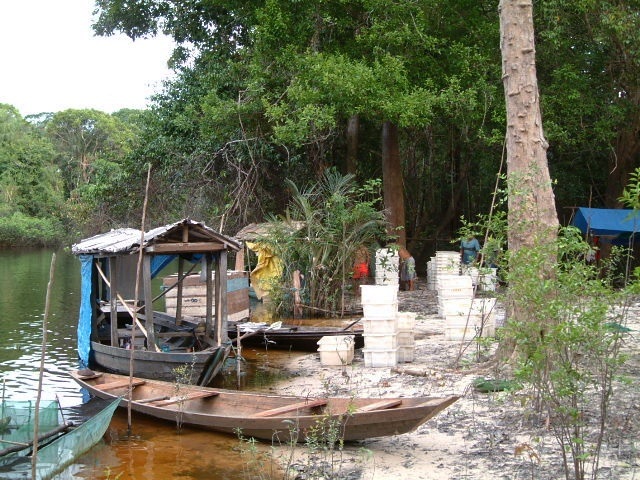 Classic camp ornamental fish boxes stacked note which will then be loaded onto ships.

This place is close to several collection points which are usually small streams (igarapé in Brazil or “Cañito” in Venezuela or Colombia) where the Cardinals are. These camps called “Viveiros” are where the cardinals are placed in submerged net “cages” within the river which allows a constant circulation of fresh water. The fish remain here for several days to until the required quantity is collected and to warrant bringing a large boat with fish crates etc. 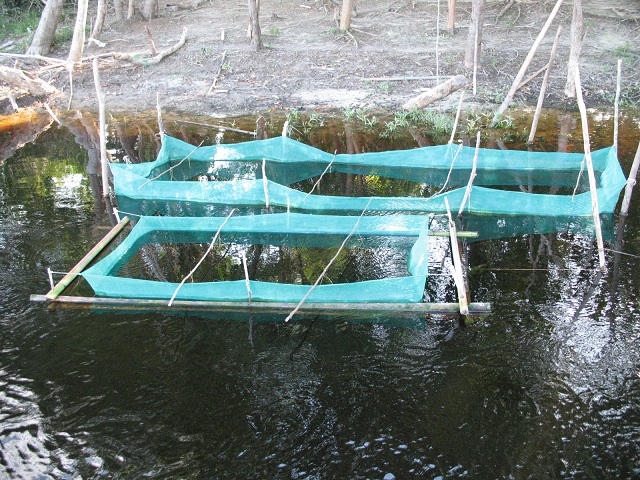 Here we see the “viveiro” armed on the coast of the camps.

The cardinals are captured by natives with a particular net called a “napa” consisting of an oval and large hoop with a very particular “T” grip handle to allow it to be maneuvered with one hand whilst the other hand containing an oar scares the shoal towards the net. 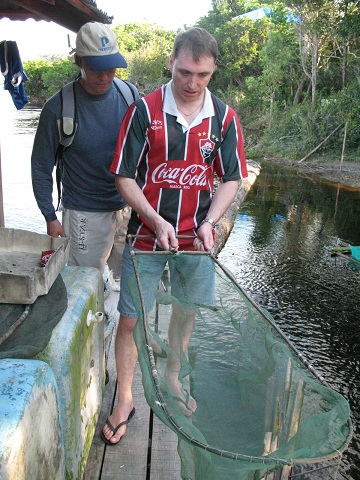 Carnegiella marthae in one of the boxes interspersed with Cardinals. Demini River tributary of the Black River, Brazil.

Once collected, the boxes are checked several times along the river checking for tetras or small fish that are not cardinals, most are thrown into the river leaving them free but some other species required by the aquarium trade are placed apart (Crenicara sp., Hatchet fish (Gasteropelecus) & different tetras) which together with the cardinals are then loaded into the classic transport boxes to bring them to the collectors on the barges. Sometimes the Piabieros own camp are responsible for separating the Cardinals by size using a sieve of wood and sometimes a net, either one way or another Cardinals are separated by their sizes with larger specimens being called “jumbo”. Also from the time they are placed in crates, carriers use a medicine to prevent stress-related illnesses which acts as a tranquilizer for fish. Fishermen always have fish as they charge for each fish, receiving a small sum of money every 100 cardinals, equivalent to US $ 2 each about 100 fish. At the accumulator station the fish remain in quarantine for about 4 weeks and these businesses will be responsible for transport of the fish by air to the capitals of the world.

The Exporters: This time we visited “Turkys” one of the most important collectors in Manaus, capital of the Brazilian Amazon. This place is responsible for quarantine which is held here in garden pools exclusively used for Cardinals, since the main cash income is through this fish. White tiled pools are also used for Discus (Symphysodon) and others such as Angelfish (Pterophyllum), various Catfish and Piranha.

Cardinals which were already captured are shipped in these boxes with a little water thus preventing overflow due to movement of the vessel. Oxygenation is maintained by the motion of the barge and the wives or children of fishermen are replace water frequently along the way.

As well as the motion of the boat helping to increase oxygenation, the wives or children of fishermen do small water changes using the river was on the way and also remove any dead or dying fish. 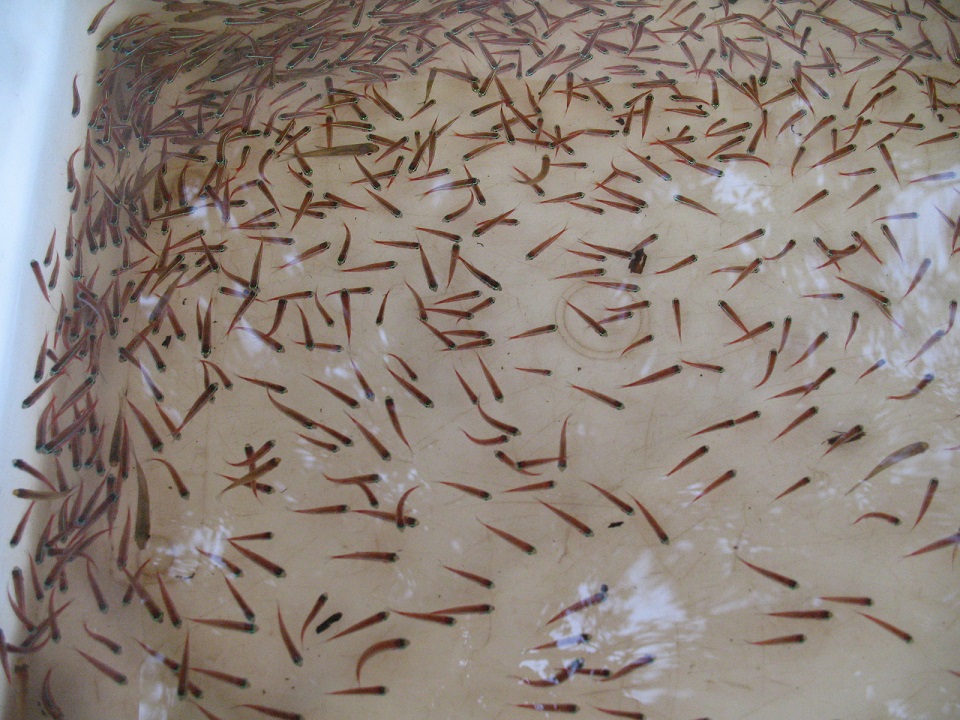 Details of these boxes full of Cardinals

We could see that after several checks by piabeiros (fishermen on the river) is still a stowaway among the cardinals here for a Crenicara sp. 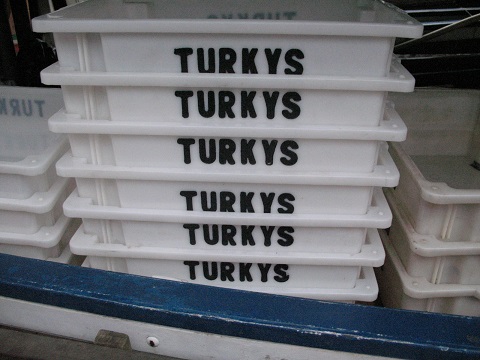 The dozens of boxes stacked with cardinals inside. 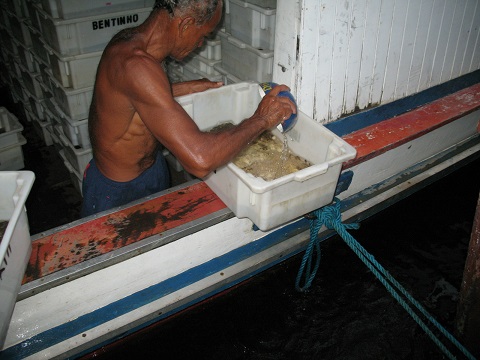 Right on the water change, arriving at the port of Manaus before being transported to the accumulator for quarantine.

Once in the farm, the fish are placed in huge wading pools (in this case) or pools on the floor as we saw in Inírida, Colombia.

Another view of these pools filled canvas Cardinals. Note that they are protected indoors avoiding sudden changes in temperature and PH (sun and rain) 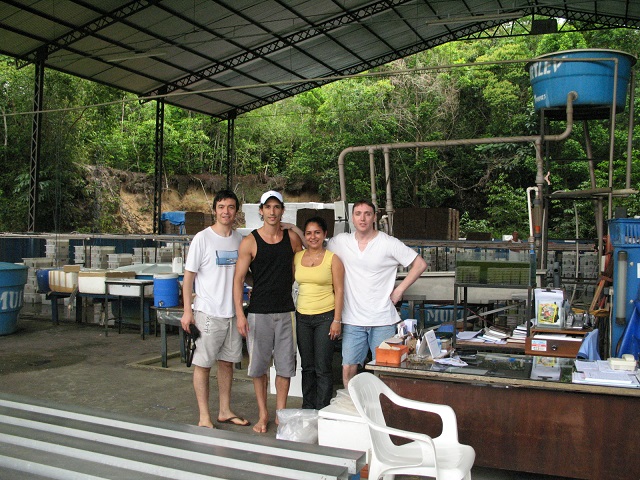 View of the “office” Turkys, work outdoors. Some boxes with more delicate fish behind us. From left to right: William, author, Maria and Enrique.

One place in Inírida, called “Los Pozos”. Detail of the concentration of cardinals.

In Puerto Inirida, Colombia, blackwater rivers are used to create pools, they are used by diverting a small trickle of water from the river. Pools contain different batches of cardinals separated by size e.g. “Jumbo”.

Gatherer “Los Pozos” Here we can see more of the craft pools on the floor using a small stream of water from the River.

Once the Cardinals are recollected they are held for a few days already acclimated and fed with artificial food. They are recaptured and packaged for transport to the nearest city of connection to the rest of the world, e.g. fish stationed at Puerto Inírida are taken to Bogota or those from Manaus are taken to Sao Paulo or Rio, as well as from Puerto Ayacucho to Caracas. 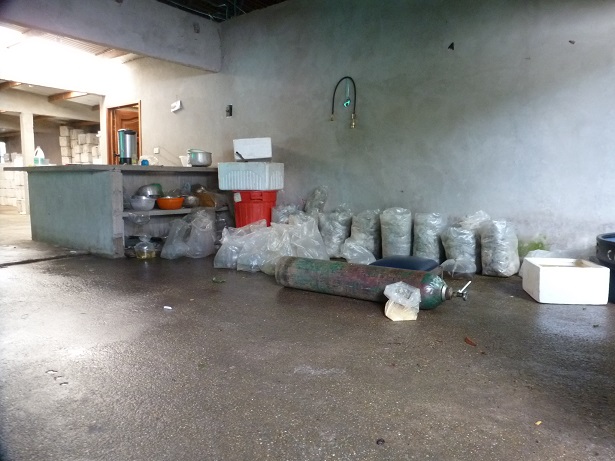 Main courtyard where oxygen is bagged and placed in styrofoam coolers. Note the large tank of oxygen lying on the ground to use it more comfortably, it is customary to sit on the tube as he charged oxygen (why is worn by sitting). 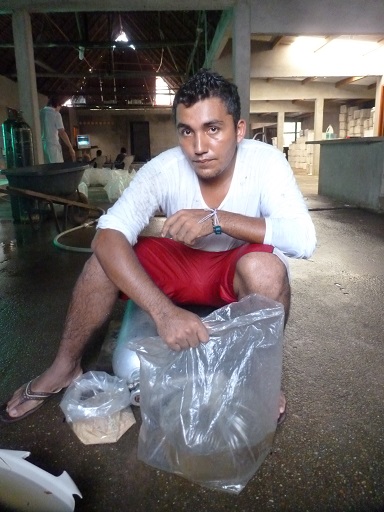 Jaison “sitting” on the tube of oxygen for oxygen transport bags of fish.

Countless species are transferred from the Amazon to the cities, usually the Cardinal Tetra is the higher output and much of the premises is dedicated to this wonderful fish. 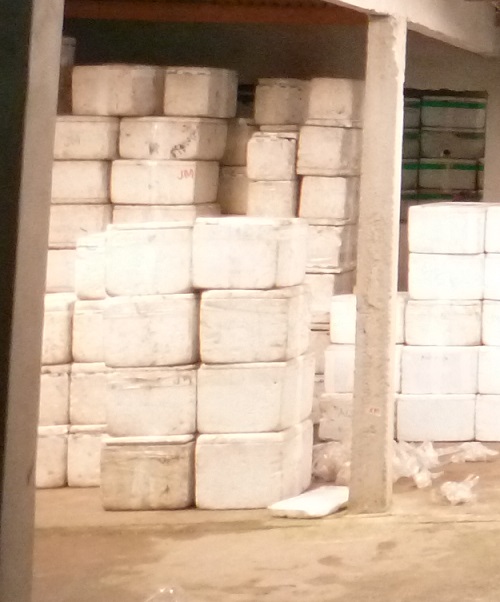 Boxes ready to place the fish and shipped by air to major cities.

Finally, I would add that the way to pack them and transport them is quite safe but the way out of their biotope until our aquariums is very long and unfortunately there are many casualties. Although once acclimatized this beautiful tetra might become a very hardy fish and if we can provide water according to its needs will show its best, there is an important obligation of the fishkeeper to always think of their journey and practice correct acclimatization. Without this acclimatization their survival in the aquarium is frequently affected. Today these fish are reproduced on a large scale, mainly in Asia but most which are sold to supply the large aquarium trade continue to come from the (endless?) Amazon. __ Acknowledgements: Alfredo for accompanying me on expeditions, to my family that endures my obsession with fish, Perico covering me on trips.