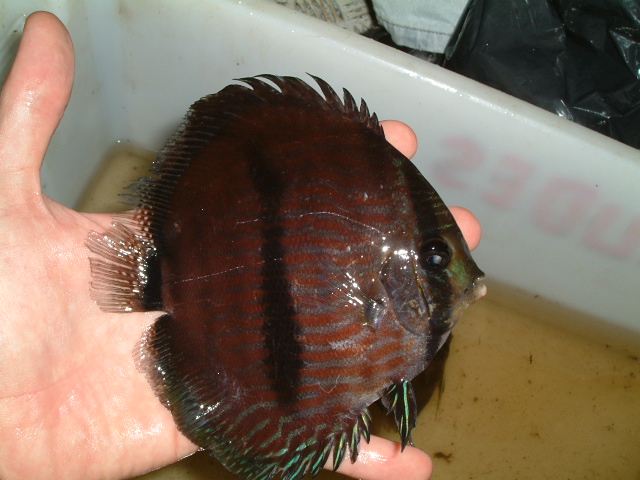 In this article my intention is to give some insight into the world of the Heckel Discus (Symphysodon discus) before they arrive to our aquariums. This prior world is less well known but holds all of the joy and satisfaction as keeping the fish themselves. I will tell you only things which I experienced personally in the ten days of this trip, things which taught me a great deal. Amazonia Any ornamental fish lover at some point has thought about what it would be like to see or visit the Amazon. The vast majority of all freshwater fish in the ornamental fish hobby are imported from the Amazon region and we would be lying if said we had not wondered what type of place our aquatic beauties are from. Since childhood I wanted to do this trip and for various reasons I had not been able to until January 2007, after acquiring “the bible” as it has come to be known (Bleher’s Discus Volume 1). I could no longer stand to postpone this inevitable pilgrimage and so the trip was booked; Enrique and I began researching in books and online and preparing for our trip, to fish for Heckel discus! We knew this trip would be nothing like our trips to collect fish in our country, Argentina. nike kwazi soldes We spoke about the jungle and collecting fish at night and of course then came the need for immunisations… You have to be pretty prepared to go into the jungle and so we required vaccines for Hepatitus A & B, Typhoid, Diphtheria, Yellow Fever and also Malaria in the form of oral tablets; the last two being fundamental. The idea was to reach Manaus because it is the main gateway to Amazonia and then to leave for Barcelos where we would pass Las Islas Anavilhanas, as well as the “meeting of the waters” between the Rio Negro and the Rio Branco; it is one of the smaller of various meetings between black and white waters in the Amazon and finally arrive at the Rio Demini; three recognised biotopes of Symphysodon Discus.

It was October 8th 2007, a date will never forget in my life. We left Buenos Aires for Sao Paulo and then headed from there onto Manaus. We arrived in Manaus at noon and the clouds made the weight of the heat and humidity all the more noticeable. chaussure tn pour homme The first thing to do? Get an ice cold beer! or “Geladas Cerjevas” as we call them. bottes ugg As the ships began coming in at 4am, we were lucky enough to find a ship containing a large consignment of fish including Corydoras and Symphysodon haraldi (Blue & Brown Discus)! We felt elated and to see the size of some of the Discus you would believe they are farmed!

The fish are all transported in about 7cm of water and right there at the harbour they make another gradual change of water using the black water from the river.

The Discus looked incredible and it is my pleasure to share these photos with you. But our journey has not yet even begun!

Something which really surprised me was in the shipment with all of these natives species, Trichogaster. sp (Asian Gourami!). They are being raised in Amazonia…

After our early morning insights we headed to the larger ornamental fish exporter in Manaus where we were able to see some many of our favourite fish from the hobby.

Off to Barcelos.. We took a small plane from Manaus to Barcelos, the paradise of “The Discus” & “The Cardinals”. Here they actually have an event known as “Festa do Peixes Ornamental do Barcelos” (Fiesta of Ornamental Fish of Barcelos). At this event, two parties compete as either “Acara Disco” (Discus) or “Cardinal” and the competition is so high that in order to demonstrate their allegiance to their side, people willingly paint their houses in the appropriate colours or wear shirts with the corresponding logos!

In this view you can see that the water is quite high and we would need to see areas with obvious white sand beaches which are shown in the next photo from the plane.

These were two telephone boxes (above and below) we found which were painted in their respective team colours showing the Discus and the Cardinal.

In Barcelos, the first thing we did was head to the hotel and then try to find the “Piabieros” (fishermen who catch ornamental fish). We eventually found the right person who was recommended to us back in Manaus. That night, us newcomers headed towards the mouth of the Rio Demini, a tributary of the Rio Negro. We were to fish through the night (the easiest way to catch Discus) and camp in the boat amongst the boxes of fish surrounded by the wildlife.

We traveled on a “Voadeira” which is an elongated boat which had an aluminium tip, quite reassuring in the case of a jungle expedition. At first glimpse, we could not believe what we saw, the water was as black as tea and the beaches were full of white sand, it was awesome! We stopped the boat and took some measurements of the water parameters which were; pH 5, Conductivity 8 microsiemens, Temperature 29°C (Surface temperature 31°C) at 16:30. We travel along the small channels which feed the larger waterways leading to the Rio Negro and could identify a number of Biotopes for Heckel Discus. christian louboutin The Piabieros were telling us something which we had also both read in Blehers Discus Volume 1, that the Discus tend to be found within the protection of two plants, the “Acara Acu” (see photo below) and the other is a Palm tree which grows in bunches with several trunks and has large thorns. They form a tangled mess of elevating trunks and the leaves are incredibly spiny preventing the entry of any sizable predator (second photo below).

When the water is higher, the Discus will retreat to the safe area between the bunches of Palm Tree trunks to avoid predators. Into the night… After an ‘Acara’ dinner (far too bony for my taste), we headed out into the night surrounded by songs of toads, crickets frogs and bats accompanied by the occasional gasp of River Dolphins coming up to breathe. We went in a canoe with only one oar, a flash light in hand and a fish net. The “Disquiero” (Discus Catcher) sat at on the tip of the boat with a head lamp and a torch in hand slowly navigating through the greenery and into the flooded forest.

We quickly saw a beautiful group of Mesonauta sp asleep within the branches. It was almost floating and completely unaware of the goings on whilst it slept. It was amazing to see, as was the fish (shown below), the Disquiero turned off his head lamp, dazzled the fish with the torch and within a second the fish was in the net. We also found some other very interesting species including Pterophyllum scalare and “Tucunare” (Cichla sp).

Soon came the most highly anticipated moment of the trip, within the framework of almost impenetrable branches we saw them, the Symphysodon discus! Wild Heckels!

As another Discus was slowly eased into the net as it slept (above), I measured the water parameters which were; pH 5.20 Conductivity 6 microsiemens, Air temperature 28°C, Water temperature 29°C. The water was the characteristic colour of tea, but it was highly concentrated to the degree that below 50cm visibility is none.

In the following days we fished in other parts of the Demini river and it was truly incredible. As above, you can see that we found juveniles and exceptionally red adult Symphysodon discus, the unique and mysterious King of the Aquarium. I must thank my family for tolerating my obsession with both the Amazon and with Discus. Also, thanks to Guillermo and of course to Heiko Bleher for his fantastic work which helped us a lot. Thank you finally to Joseph for bringing “The Discus Bible” to Argentina for me.