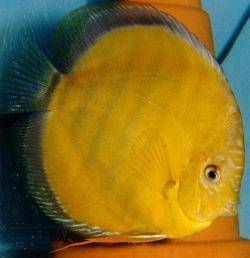 Brian Middleton was his name, the first man to breed the elusive and incredible Xingu River Discus fish. I tried for years to find him, but he had literally disappeared from the aquarium hobby sometime in the late 1990’s or soon thereafter and seemed unreachable. All I had was one old photo I was able to find online which showed just how magnificent these golden Amazonian gems could become under the right care; if only I could find him…

Years passed by and my search had more or less dwindled into some sort of long lost idea .. The days of searching for someone – anyone, who could help me find the fish I so longed after had gone, but it always remained a passing thought from time to time.

Then, one evening I was working late and began to run out of steam so I followed up on the recurring thought that once again flickered into my wandering mind and managed to make contact with a man behind the only video I could find showing Xingu Discus; and they were even new to him at the time!

While I waited for days on end in anticipation of his reply, I watched the video repeatedly – stunned somewhere between fascination and infatuation. Nandi Hivatal from Hungary was the owner of these fish and he himself had searched long and hard to find them; he’d had a stroke of luck finding them through an importer based in Germany. We spoke day after day and sometimes late into the night about these fish and how they were somehow different and special. Their discreet Amazonian beauty captivating us both and yet somehow, they were largely under-rated and under-appreciated.

Towards the end of Summer 2010 Nandi managed to do the unimaginable – he incited his Xingu discus to spawn; this made him the 3rd person to breed them after Dirk Schlingmann from Germany who had also had success in the 90’s. Not only did Nandi breed one pair, but of the 7 fish he had, he somehow managed to get three breeding pairs! He later obtained an 8th fish which he paired with the last remaining fish to give a total of four pairs out of eight individuals. I attributed his admirable success to his excellent knowledge of water filtration, he was building and selling some very advanced custom-made filtration systems at the time and they definitely did the trick. He also was like me, a big fan of keeping things as natural as possible and regularly added fruits like blueberries to supplement his fish’s diets; from this we had many discussions about Discus fish nutrition. 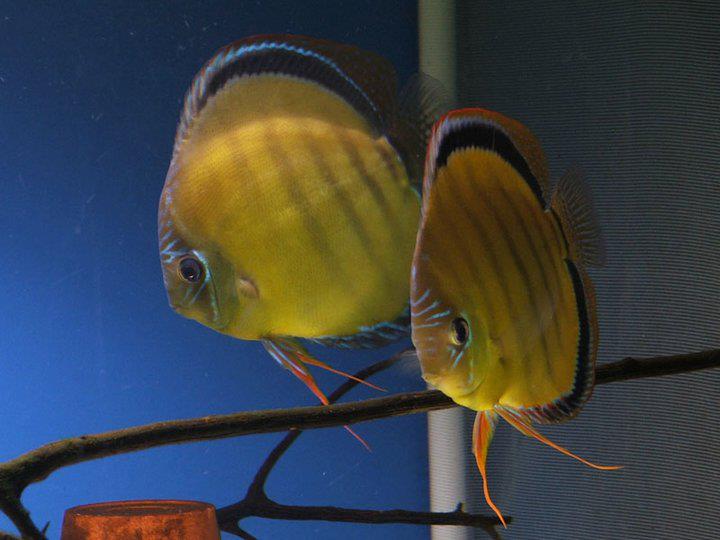 Nandi decided to raise two batches of discus fry, one batch from one set of parents which he named Batch ‘A’ and the other batch from one of the other pairs, Batch ‘B’. In January 2011 Nandi’s young fry were becoming of the right size that he had to begin thinking about their new homes. He had a friend who was travelling to London by van and who agreed to bring the fish to me, I was ecstatic beyond all belief. I felt as though I had willed hard enough and made it come to reality!

Anyone with even a faint interest in the law of attraction theory will have relished this part of the story.

Within a few weeks it was February and all sorted! The fish were on their way to me and after what felt like months, but was just a day and half, I got the telephone call, they were here! The time was approximately 12.30am at night and so as you can imagine a long night of acclimatisation ensued, but to me, it was worth every minute. My eyes never tired even with the onset of 4am and despite having to head off to a supplier just 2 hours later my day felt brand new. 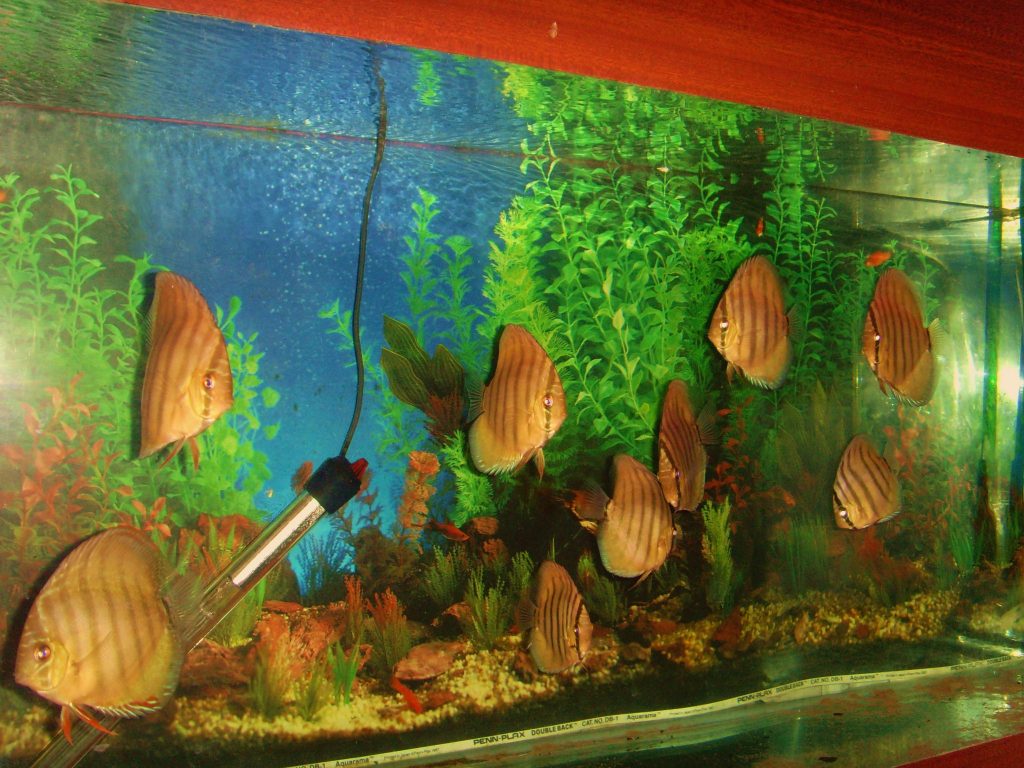 Crucially, both batches went into separate aquariums in order to preserve pure genetics for any attempts to breed them later on 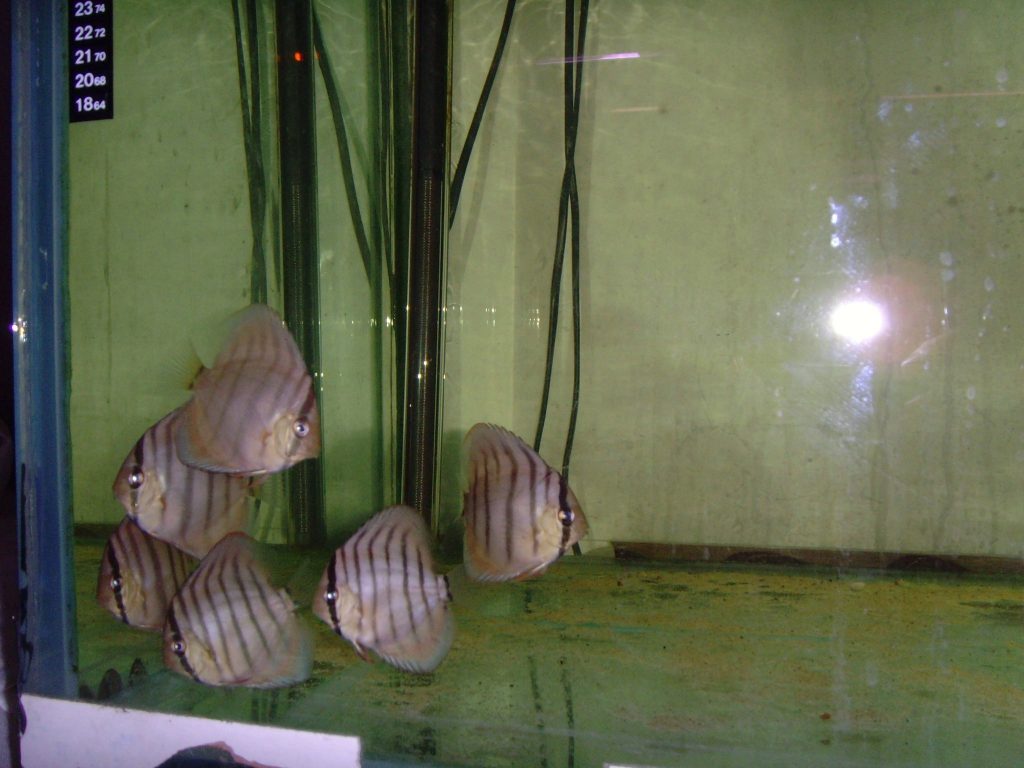 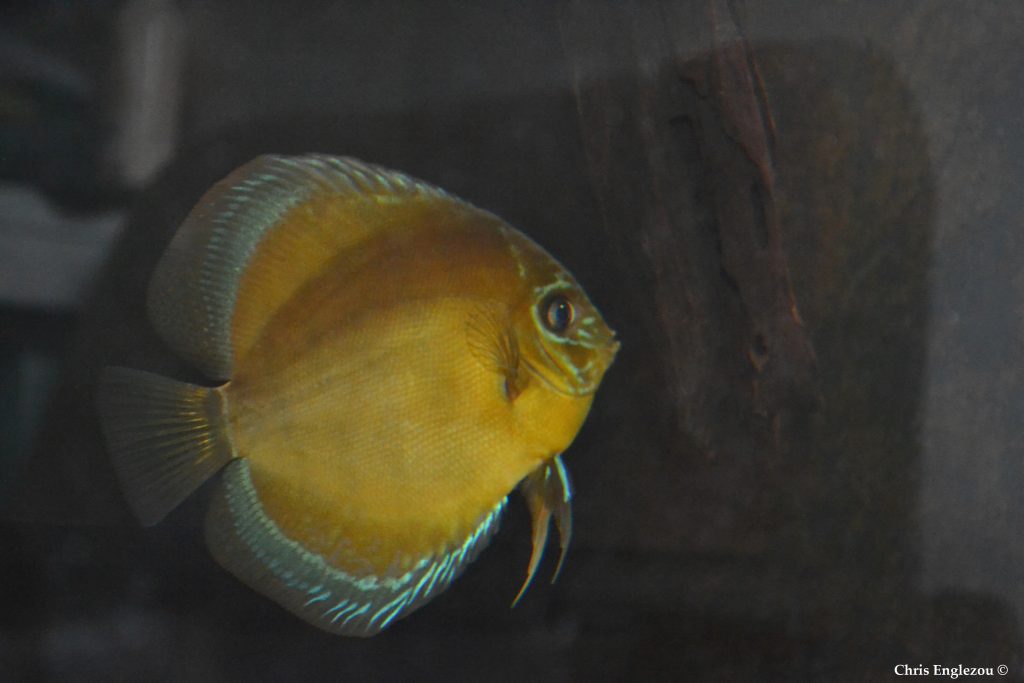 One of the young females from Batch B became one of my favourites, although there were quite a few that all looked amazing.

I made a few experimental introductions between the unrelated batches. The best females were from Batch B and although both groups had some very nice male fish, the unrelated alpha male from Batch A was the logical candidate. I was lucky because they literally both fell in love with each other immediately as they were introduced. They danced the courtship ritual throughout the whole day and even continued into the night, so I left a little spotlight on for them each evening for the next few days and it seemed to help. 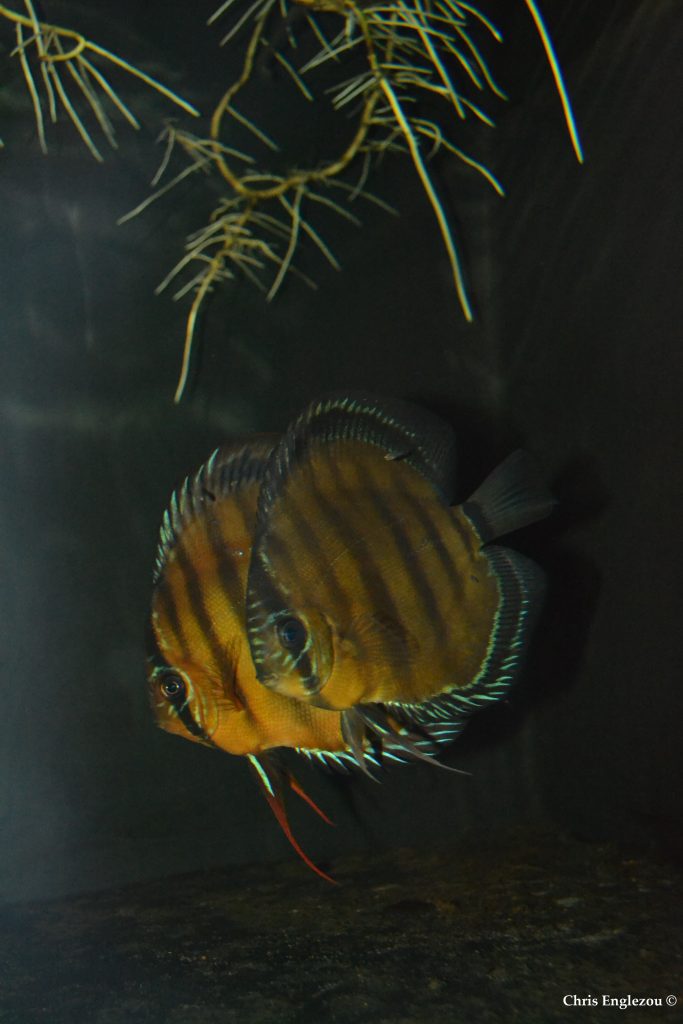 This first pair formed a really close bond and both went on to be exceptional parents. Female (foreground)

It was a matter of days before they had eggs and I attributed most of my success to three main things. The first was that I had made their aquarium into a biotope, I had replicated the water parameters of the Xingu River thanks to some helpful information from Mark Sabaj Perez and from a wonderful book by the incredible human being Michael Goulding, which I recommend to any Amazon fish enthusiast: The Smithsonian Atlas of The Amazon. The second was that they had been raised entirely on an experimental formula that I had been devising. It was the first of its kind, being based entirely on replicating the natural diet of Symphysodon; it even included several real Amazonian fruits that I had managed to import via a supplier after much difficulty. The formula itself eventually became the product Naturekind Advanced Fish Food after about 6 years of research and development which saw me travel through a few jungles and make large investments in trials and analysis. The third and final attribute of this breeding success was just simply leaving them alone to do what their instincts guided them to do – and they did it really well! 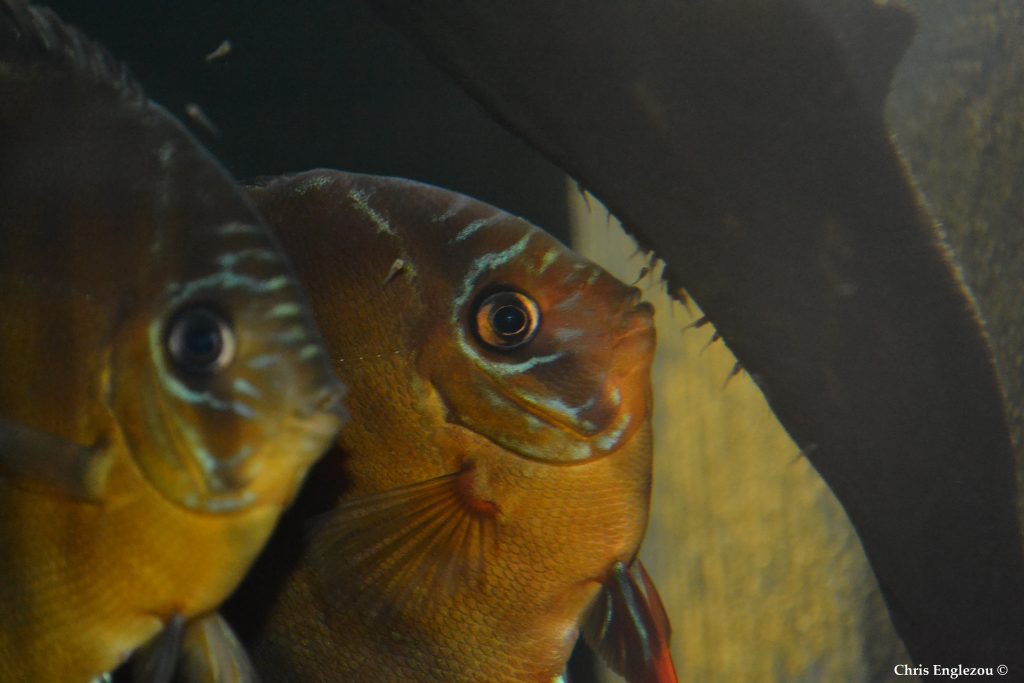 “Pair 1” were very special to me, in fact they were probably the two best fish of both batches combined; they were great parents

With my time severely limited due to work constraints, I rarely had enough time to raise the young, although I did occasionally try, but I can assure you that trying to halfheartedly raise discus fry is not something that works; it is definitely an all or nothing process. 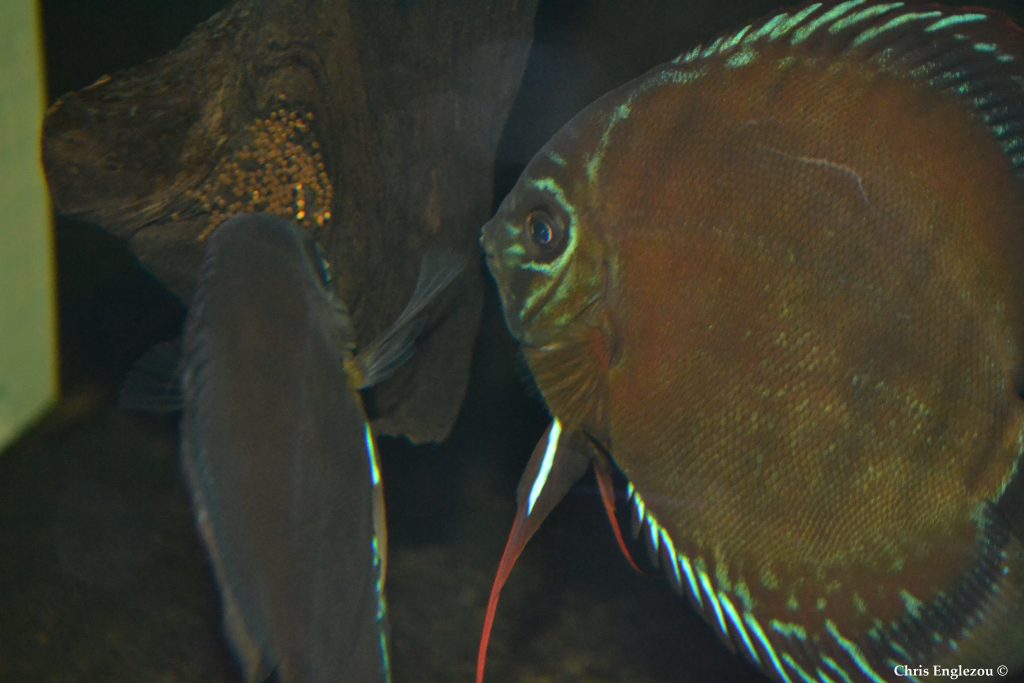 In 2013 though I began to notice something interesting about some of the Xingu discus which I hadn’t really thought much of previously. Some of the fish from Batch B had absolutely no red markings whatsoever and it dawned on me that even their base colour was lighter than that of the others, it was a paler yellow. I had a theory that they may have lacked the genes for expressing red pigmentation altogether and so I decided it was worthwhile to breed two siblings together in order to try and fix this gene for future breeding. My long term aim was to try to stabilise the genes of the lighter yellow variant and maybe further down the line out-cross the next generation to a ghost discus to create a bar-less discus which retained the Xingu’s characteristic black halo but had a true yellow base colour.

I raised the first batch of fry relatively well despite my time constraints, although it was mostly due to the large water volume of their aquarium and the good work of the parents, but I knew it would catch up with me eventually and I would fail sooner or later so I decided to ask some dedicated fish breeders to take on the project for me. I guessed that it would be exactly the type of thing a discus breeder would be interested in, the chance to stabilise a new gene, create a new strain and have something unique throughout the world – sadly it wasn’t..

I literally had to beg some of the countries top breeders to take these fish on and I only had a handful that I genuinely trusted with the task so I ran out of options and the project was abandoned. I even went back to Nandi and his now project partner Andras Kis, together they had established a side-business in Hungary breeding exclusively Xingu Discus called The Xinguary.

Nandi still had the mother of Batch B, but he felt she had grown too old to breed and we never managed to get my own fish back over to him.. A long story short, after a random electrical accident killing most of Batch A and some of Batch B (Pair 1 included), I decided to let Pair 2 just enjoy each others company in peace; the female eventually died and the male soon after.